In this Sunday’s Gospel, Jesus heals the man who is deaf and cannot speak.

We are back into Mark (I am sorry to have missed last week—thirty-six hours down with food poisoning plus being on the road).  Again we have Mark’s curious attention to detail.  Matthew the accountant tells this story in two verses, Luke, with his own bunch of stories to add, tells it in one.  Mark takes six or seven.

Only Mark gives us the detail that Jesus “put his finger into the man’s hears and, spitting, touched his tongue; then he looked up to heaven and groaned,” just as only Mark will tell us, in the next chapter, about the blind man who at first thinks people look like trees.

Mark is the shortest gospel, but don’t be deceived: Mark isn’t short on details.  And though Matthew and John are ascribed to members of the Twelve, and Luke makes much in his introduction of finding extra stories, Mark seems to have an inside line.  I like the ancient tradition that says Mark was Peter’s scribe, relating Peter’s intimacy.

I don’t mean to waste time on trivia, but I do think it helps us fall in love with the Gospels if we appreciate the special richness of each one.  I have found it helpful in my own Gospel reading to flip back and forth, seeing how the stories differ, to see the special emphasis each evangelist is giving us.

Helpful, too, to lean into the strange details.  The first verse seems boring: “Again Jesus left the district of Tyre and went by way of Sidon to the Sea of Galilee, into the district of the Decapolis.”

Except that the previous story is about the Syro-Phoenician woman—“yes, Lord, yet even the dogs under the table eat the children’s crumbs”—a powerful story about Jesus’ complex love for the people outside Israel.  And Sidon is twenty miles north—deeper into Phoenician territory—than Tyre (and Mark usually says “the region of Tyre and Sidon,” so when he says “the region of Tyre,” he seems to be saying Jesus was in Tyre, not Sidon).  In this one verse, Jesus is going deeper into missionary territory.

So too with Decapolis, which is the opposite, eastern side of the Sea of Galilee, furthest from Sidon and not the western shore of Capernaum, where he spends most of his time.  In fact, the Decapolis, too, is pagan, Greek territory.  These locations—precious details, in Mark’s spare Gospel—speak of Jesus’s mercy.

So too the physicality of the healing.  Jesus touches the man, puts his fingers in his ears and spits on his tongue.  He groans.  We’re tempted to over-spiritualize Christianity, to say that bodies don’t matter.  Jesus does want to heal our souls; it is lest they subordinate love of God to this world’s gifts that here, again, he “ordered them not to tell anyone”; but Jesus is incarnate, and we look forward to the resurrection of the body.  We pray not to a far-away spirit, but to the Word made flesh.

Funny how this healing works.  “He put his finger into the man’s ears.”  Perhaps it is just to be near them, that would be rich in itself.  But then he says, “Be opened.”  It seems like he plugs the man’s ears himself.  Is it too much of a stretch to imagine Jesus, soon to be crucified, uniting himself to the man’s disability, somehow becoming part of it, so that he himself can release it?  So too his spit shares in the man’s clumsiness of mouth.

One more: the Greek word here for “deaf” is literally “chopped” or “blunted.”  Sometimes in the New Testament it clearly means deaf; sometimes it clearly means unable to speak.  The word here for speech impediment is “difficulty of words.”  Interesting how closely hearing and speech go together.  If we cannot hear, we cannot speak.  Lord, restore my hearing, so I will have something to say. 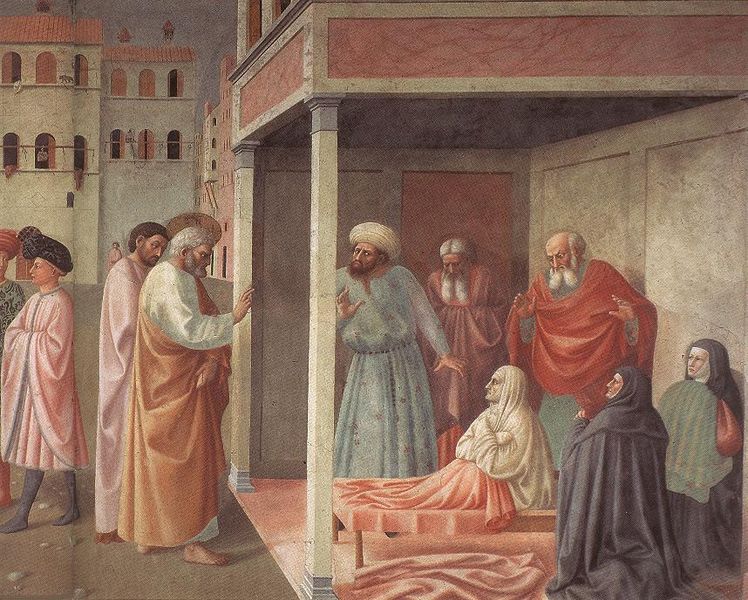 Our first reading, from Isaiah, has God restoring his creation.  The blind see, the deaf hear, the lame leap, the mute sing, the deserts burst forth with streams.  God did not make the physical world so it would end in futility; he made it to end in the resurrection of the body—and in the resurrection of man all creation is resurrected.  He who made it will restore it.

But our reading from James turns this healing to human relationships, indicting those who prefer the rich to the poor.  It seems to me that we in the American Church need to hear these readings; it seems to me Scripture and Tradition speak an awful lot about the poor, and American Catholics are awful quick to shrug that off as irrelevant.  (Walker Percy jokes that we will have a schismatic “American Catholic Church,” with the Latin Mass, “Property Rights Sunday,” and the red white and blue raised at the consecration.  Look out.)

Do you believe in the Resurrection?