If, as the ancients said, Mark is Peter’s writer, then Peter’s profession of faith is central to Mark’s Gospel.

Both Matthew and Mark say that Jesus asked, “Who do people say . . . who do you say that I am?”  Both have Peter answer.  Both then say, “He began to teach them that the Son of Man must suffer greatly,” Peter rebukes him, and he says, “Get behind me, Satan”; then he tells the disciples, “Whoever wishes to come after me must deny himself, take up his cross, and follow me.”  Much of these events is word-for-word the same, even in the narrative (not just because they remember Jesus’ words); one evangelist is using the other’s writing.

But Matthew has a passage Mark does not.  Matthew’s Gospel has, first: “Blessed are you, Simon Bar-Jonah! For flesh and blood has not revealed this to you, but my Father who is in heaven”; then: “And I tell you, you are Peter, and on this rock I will build my church, and the gates of hell shall not prevail against it”; and third: “I will give you the keys of the kingdom of heaven, and whatever you bind on earth shall be bound in heaven, and whatever you loose on earth shall be loosed in heaven.”  Big verses.

Nineteenth-century liberal Protestant scholars used this difference to discredit the papacy: Mark is primitive, therefore “real” Matthew made all this stuff up.

Now, I believe the Gospels are true, the very foundation of Christianity.  Matthew is Gospel truth.  But it must be said: I heard two homilies this Sunday, and both talked about Peter’s profession while sweeping under the rug all that stuff about the Cross.  Mark is correcting Matthew, in the sense that he doesn’t let us get carried away in triumphalism.

Mark isn’t so primitive.  He adds little details.  Matthew says they’re going to the “district” of Caesarea Philippi; Mark, with his typical eyewitness details, says this happened in the “villages” of that district.  Matthew just says they were there, Mark points out that it happened on the road.

And Mark adds, when Jesus speaks about the cross, “He said this openly,” and that when he rebuked Peter, he was “looking at the disciples,” including them.  Mark has something to say. 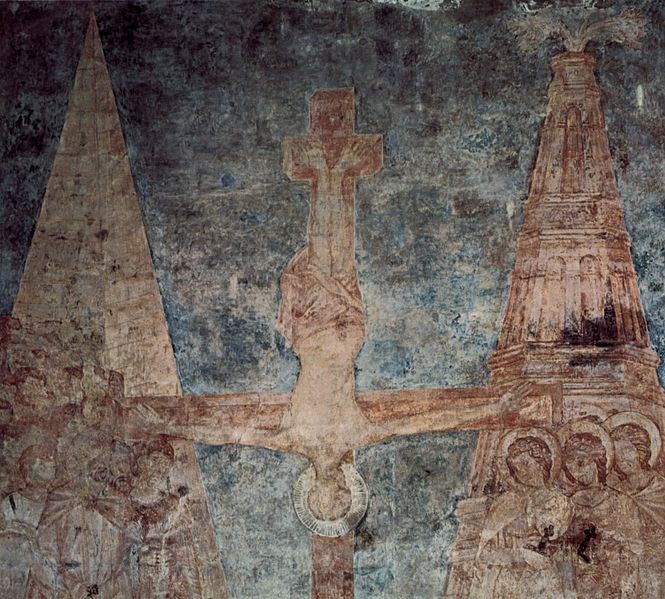 What he has to say is that Peter got it wrong.  Yes, Jesus said those words about Peter’s leadership.  But Mark’s version of the story emphasizes that, though they knew to call Jesus “Christ,” they didn’t know what that meant.  Fine to profess Jesus Lord—do you know that it means the Cross, both for him and for you?

Mark even reorders the final words, about the Son of Man coming in glory.  Matthew announces that it will happen: “For the Son of Man is going to come with his angels in the glory of his Father, and then he will repay each person according to what he has done.”  Hurrah!

Mark subordinates that coming to Peter’s shame: “For whoever is ashamed of me and of my words in this adulterous and sinful generation, of him will the Son of Man also be ashamed when he comes in the glory of his Father with the holy angels.”  How awful to deny Christ.  And that’s the center of this Gospel.

The first reading is always picked for the Sunday Gospel; here we get Isaiah, “I gave my back to those who beat me, my cheeks to those who plucked my beard.”

The second reading, however, is going through something in order—we’re three weeks into a five-week tour of James—and now we get: “What good is it, my brothers and sisters, if someone says he has faith but does not have works?”

First: those two readings match the two statements Jesus makes about being Christ.  First, he has to suffer: “I gave my back.”  To profess Jesus is Lord is to profess him as that Lord, the Suffering Servant.  But then Jesus says we have to bear our own cross: no good to profess him Lord unless we join him.

Second: in Isaiah and that first paragraph after Peter’s profession, he says the Messiah is poor.  He unites himself not to our power, but to our weakness; we ourselves must find him on the Cross, not in earthly splendor.  But in James and that second paragraph, he says that he is for the poor: James’ central image of “works,” throughout the letter, is caring for the poor: “If a brother or sister has nothing to wear and has no food for the day.”  Jesus says, “whoever loses his life for my sake”: give it all away.

Third, the reason is our faith that God will protect us: In Matthew’s commendation, Jesus says, “Flesh and blood has not revealed this to you, but my Father who is in heaven.”  But in both Matthew and Mark, when Peter denies the cross, Jesus says, “You are thinking not as God does, but as man.”

But, “See,” says Isaiah, “the Lord GOD is my help.”  “He is near who upholds my right.”  We can afford to suffer, to be poor and for the poor, because we believe the Lord is strong, and he is with us.

Where do you rebuke the Cross?