Last week I said John’s Gospel rereads the other Gospels.  In the second part of the Bread of Life Discourse (John 6), we saw John revisiting the “Isn’t this the carpenter’s son” scene, but in a Eucharistic context.  This week, we move on from the Incarnation to the Eucharist itself. 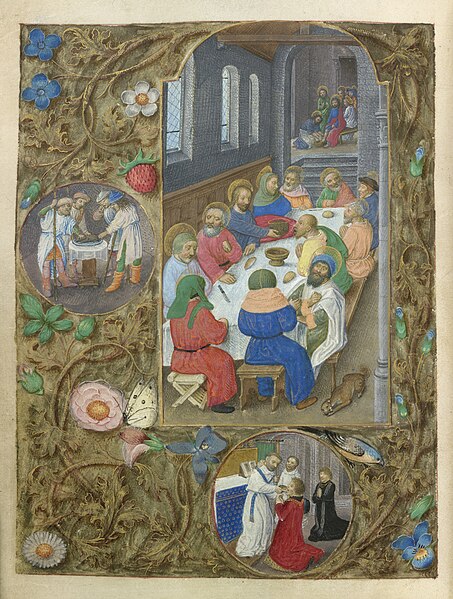 The other three Gospels give us the Last Supper: “This is my Body.  This is my Blood.”  John skips that—we know that.  Instead, at the Last Supper, he gives the washing of the feet and then the great prayers, culminating in the prayer for unity.  He’s showing us the meaning of the Eucharist.

But here in John 6, it’s the reverse.  John knows that we already know about the Last Supper, and about the Mass.  But he wants us to dwell in it.  We have a kind of Scriptural Eucharistic Adoration, a prolonged time of gazing on the mystery we celebrate at Mass.

(Jesus said lots of things, lots of places; there’s no need for the Evangelists to make things up—but they do choose which things to present, to help us understand.) 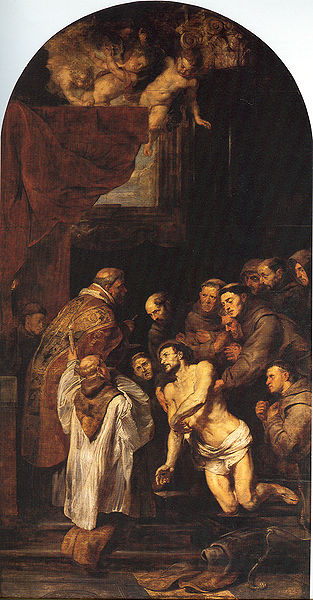 Mostly, he insists on the insane mystery of it.  On one side are massive statements about the consequences of the Eucharist: “Whoever eats this bread will live forever.”  “Unless you eat the flesh of the Son of Man and drink his blood, you do not have life within you.”  “Whoever eats my flesh and drinks my blood . . . I will raise him on the last day.”

Those are extraordinary claims.  Resurrection has a special force.  It’s a claim, first, about Jesus himself: to say that he can raise the dead is to assert the highest power in the universe.  And he doesn’t say, “I will ask my Father,” but “I will raise him.”

We’ll see that Jesus has higher things to give than the resurrection of the body—but the body is part of it, and it’s something that prevents us from turning everything into little metaphors.  No, he says this bread contains absolute divine power.

But the other thing he says is that he is talking about bread.  (It’s not bread: it’s Jesus, who can raise the dead.  But he comes in the form of bread.)

There’s a progression of words for “eat.”  There’s the normal eating word, which we’ve seen a lot lately.  But then there’s another one, that we’ve also seen, like cattle.  That comes up again when he says, “My flesh is true food.”  It’s not a vague spiritual word, it’s the coarse word of the crowds gobbling barley loaves: this is eating stuff.

And then there’s the famous “trogon.”  My old Greek dictionary uses the word “craunch” (instead of “crunch”).  I don’t know where that “a” comes from, but I love it.  It’s not a spiritual word.  It says, look, it’s going to be in your mouth, and your teeth are going to hit it, and it’s going to make noise: craunch.

John emphasizes the same thing with dialogue.  “The Jews quarreled among themselves, saying, ‘How can this man give us his flesh to eat?’  Jesus said to them, ‘Amen, amen, I say to you, unless you eat the flesh . . . .”  They don’t say, “Oh, what an interesting metaphor,” they’re upset.  And he doesn’t say, “oh, no, you’ve misunderstood, the eating thing is just a metaphor,” he says, “Craunch.”  This Incarnation stuff is serious.

First he says, “you’d better eat [a normal way] or you will have no life.”  Then he says craunch, craunch, craunch.  “Who crunches my flesh and drinks my blood has eternal life, and I will resurrect him.  My flesh is what you eat, like you gobble barley loaves.”

The deeper point is “eternal life” and, even deeper, “Whoever eats my flesh and drinks my blood remains in me and I in him.”  “Remain” might be John’s favorite word.  It too is a Eucharistic adoration word.  Dwell here, stay here, live with me.  “I have life because of the Father, so also the one who feeds on me [craunch] will have life because of me.”  I want to be your substance, your very life.  Discover my mystery in the Eucharist.  You don’t get life except by receiving me, in my fleshy breadiness.

The other two readings take this crunchy earthiness back to the spiritual.  “Wisdom has . . . dressed her meat, mixed her wine. . . . Come, eat of my food, and drink of the wine I have mixed.”  The Eucharist is the wise meal, and it is the meal that gives us wisdom itself as our food, so we can live by wisdom.

And in Ephesians we read, “live not as foolish persons but as wise. . . . Do not get drunk on wine . . . but be filled with the Spirit”: let the Spirit be your wine.  And as the drunk sing, so you will be “addressing one another in psalms and hymns and spiritual songs, singing and playing to the Lord in your hearts, giving thanks [eucharisting] always.”  Our drink is not earthly, but spiritual.

And yet it comes through the earthiness of the Incarnation and the Eucharist: through Christ alone.

How do you keep alive the centrality of the Incarnation and the Eucharist, of Christ and Christ alone?