This Sunday we are blessed to celebrate the great feast of the Transfiguration.

The readings begin with an apocalyptic vision from Daniel:

His clothing was bright as snow,

and the hair on his head as white as wool;

his throne was flames of fire,

with wheels of burning fire.

A surging stream of fire

flowed out from where he sat;

Thousands upon thousands were ministering to him.

This is not a cuddly Jesus.  It is not even a humble Jesus.  This is Jesus revealed as God.  The Transfiguration reminds us that within the poverty of the Incarnation is the God of Gods.

It seems to me, listening to preaching, etc., that we as Catholics would understand our faith a lot better if we had a more vivid sense of God.

Our reading from Second Peter is an eyewitness account.  “We ourselves heard this voice come from heaven while we were with him on the holy mountain.”

Second Peter is a remarkable document, an approach to Christian faith and life through the encounter with the Transfigured Christ.  There are other kinds of approach: through the Resurrection, through the Ascension, Paul’s encounter with the glorified Christ, and yes, through the Cross.  (St. Mark – St. Peter’s disciple – always calls us to the cross.)  But we need to contemplate the face of Christ, to know who he really is.  It all begins with that encounter.

Let us approach the Transfiguration in four acts.

First, they see him transfigured.  Mark’s Gospel, like Daniel above, compares the whiteness to earthy

things, snow and bleach.  Luke says it was dazzling, flashing out like lightning.  But this year we are reading Matthew, the literal.  “His face shone like the sun, and his clothes became white as light.”  Precisely.

Second, he converses with Moses and Elijah.  On the one hand, Scripture, the Old Testament, bears witness to Christ.  Jesus is the fulfillment of the Law and the Prophets.  Everything points to him, in his glory.

And it is beautiful.  Peter says, “Lord, it is good that we are here.”  The Greek of the New Testament has two words for good.  This one is not good in the sense of profitable.  It is kalon, the word for beautiful.  This is the Good: through Scripture to see the glory of Jesus.  Lovely! 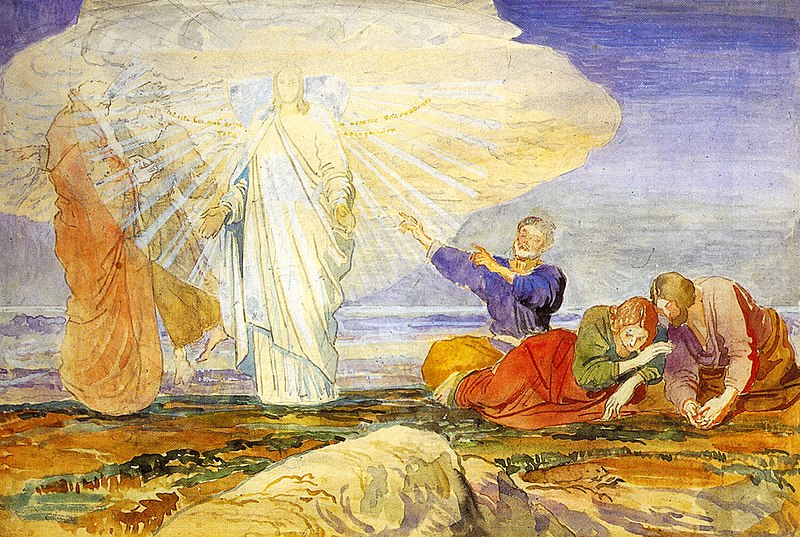 On the other hand, the good seems within grasp.  Peter is ready to build tents.  Tent is a loaded term in the Bible.  In John’s Gospel, when the Word was made flesh and dwelt among us, it is with such a “tent.”  And in the Old Testament, the first temple itself is called the tent, the tabernacle – same word.  There is some presumption in Peter’s offer.

But third, “While he was still speaking,” God interrupts him.  “Behold, a bright cloud,” which Tradition sees as the Holy Spirit.  And the voice of the Father says, “This is my beloved Son, with whom I am well pleased,” repeating the same words from the Baptism in the Jordan.  But where those words seemed a beginning then, now they seem a culmination.

And where Peter was presumptuous before, now, “they fell prostrate and were very much afraid.”  (My kids, quoting the King James via Charlie Brown, use the same words as found when the angels speak to the shepherds in Luke’s Gospel: they were sore afraid.)  The “very much” could be translated “violently.”

From presumption and tabernacle building, we move to awe.  We all need this movement.  To discover the divinity of Christ is to discover that God doesn’t need our help, and we aren’t the boss.

Parallel to this movement, the Father adds one phrase to the words from the Baptism: “Listen to him.”  We are called to action – but in reverence.  Jesus will tell them to keep silent until the Resurrection.  God comes first.  Worship comes first.  First we must know him, and know him as God.

Then in the fourth act, “Jesus came and touched them, saying, ‘Rise, and do not be afraid.’”  Jesus takes them beyond fear.

But he takes them there by touching them.  The word even means “attaching himself” to them.  In the

Incarnation we pass to a new relationship with the divinity.  Before, we were forgetful of God.  Now we see his beauty, we fall down in awe – and we rise again, not the same, but transformed by the recognition that in Jesus God has come to us, attached himself to us, touched us.

And so “when the disciples raised their eyes, they saw no one else but Jesus alone.”  Encounter.

What can we do to make sure we live in awe before the glory of God in Christ?  In what way do you need to fall down before the Transfiguration?