This week’s Gospel is the widow’s mite: “she, from her poverty, has contributed all she had.”

Our reading about the prophet Elijah gives the story of another widow.  The prophet is demanding.  To a woman who is preparing her last meal before she starves to death, he says, “First make me a little cake . . . .  Then you can prepare something for yourself and your son.”  The Lord provides—but only to those who give him everything. 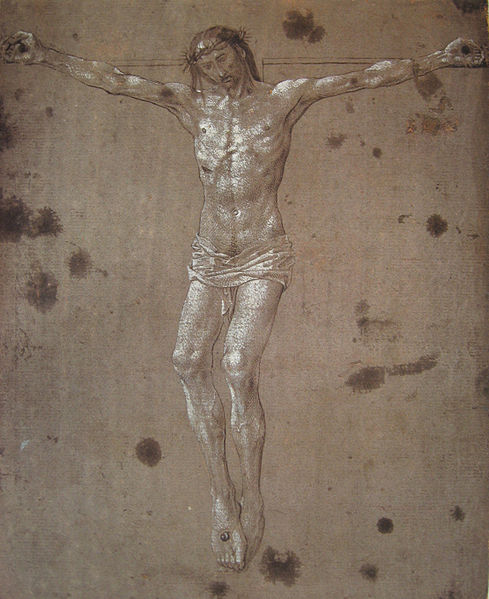 Our reading from Hebrews takes us into the priesthood of Jesus Christ.  The priest of the Old Testament could offer only a “blood that is not his own.”  To sacrifice something other than ourselves has no power to overcome our sins or to establish our relationship with God.  But like the widow, the sacrifice Jesus offers is his own life.  That is the only true and sufficient sacrifice.

The flipside is that when Christ “will appear a second time,” it will no longer be to offer sacrifice, but “to bring salvation to those who eagerly await him.”  That “eager awaiting” is the sign of our own sacrifice: do we, like the widow, long only for God?

Last week we read about loving God with our whole heart.  Now we see how demanding that love is.

Our Gospel gives two contrasting paragraphs, one about the scribes, one about the widow.  The scribes—those who know God’s laws and promises from the Old Testament—are a theme here.  Last week it was a scribe who knew that we should love God with our whole heart, and to whom Jesus said, “You are not far from the kingdom of God.”  To know is not far—but not there yet, either, until we love in fact.

Then the Lectionary skips a short scene where Jesus argues with the scribes, who misunderstand the power of the Messiah.  They know the command, they don’t fully appreciate the promise. 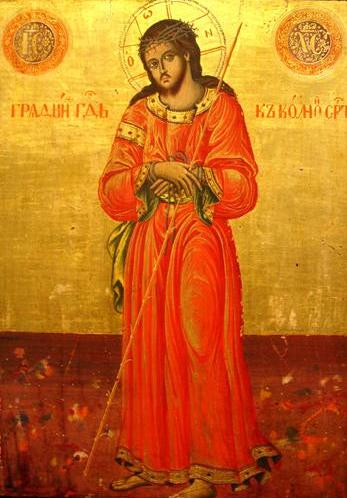 And this week, he condemns the scribes.  He says they “like to go around in long robes (in Greek, stoles) and accept greetings in the marketplaces, seats of honor in synagogues, and places of honor at banquets.”  Sound like anyone you know?

They have their fancy costume, and they go three places: the marketplaces, the synagogues, the banquets.  Everywhere, they want to be first.  But notice that all of this is very social.  One could imagine that they—as so many of us today—pass this all off as love of neighbor: how could I not love to greet people in the marketplace, and to go to parties!  We pass off a lot of self-indulgence in the name of love.

Then comes the stinger.  Jesus tends to slap us in the face, but here he is more like Paul, who likes to bury the sting.  “They devour the houses of widows and, as a pretext, recite lengthy prayers.”

“Devour” is literally “eat up,” and it comes right after the banquets.  I’ve only seen one scene from the Sopranos, but it’s on this theme.  How often, in the name of ministry, do we all—yes, priests especially, but all of us—claim to be piously enjoying hospitality, when in fact we’re just serving ourselves.  How often, in the name of love, do we justify self-indulgence?

The “widow” puts a point on it.  It’s still self-serving if you’re getting your steaks and movies from Carmela Soprano, who has plenty of money.  But the widow brings out the pure selfishness of the scribe who claims to be pious and eats away her livelihood.

Jesus then looks up to see a widow.  The last line is, she “has contributed all she had, her whole livelihood.”  In fact, the way Greek says this is, “her whole life”: what the widow put in the coinbox was, for her, life itself.

Elijah demanded all—but Elijah also had the miraculous power to restore that widow to life.  He gave more than he received, and his receiving was truly in the name of piety.  That’s not true of much that we do.  We are called to be like the widow, not like Elijah.

I like the contrast between those who “contributed from their surplus wealth” and she “from her poverty.”  The Evangelist introduces the widow as a “poor widow.”  In Greek, the word for “widow” already means, literally, “one in need”; it’s not just that her husband is dead, it’s that she has no provision.  But the word for “poor widow” here means “crouching,” and thus “begging”; it’s distinct from a word for poverty that means “toiling”: the “crouching” person is a beggar.

Then the contrast is built on two prepositions.  The word for “abundance” is a fun expansion of the word “around”: either it means, “people with a lot of stuff within arm’s reach” or “people giving the stuff that is nearby, but not really themselves”—like the Old Testament priests, who offered animals instead of themselves.  But when it says she gave “from her poverty,” it’s a similar expansion on the word “under”: either because she is the kind of person who is “beneath” everyone else, or because what she gives, what he next calls her very “life,” is not something just “nearby” her, but the very ground she stands on.

Like it or not, friends, when Jesus tells us to love with our whole heart, he doesn’t mean we go to parties and get fed.  He means we enter into the widow’s poverty—the poverty of Jesus Christ on the cross.

Where are your claims to love really a sham?