I’m really trying to get these posts up before Sunday, but I have had one technical problem after another.  Sorry about that. 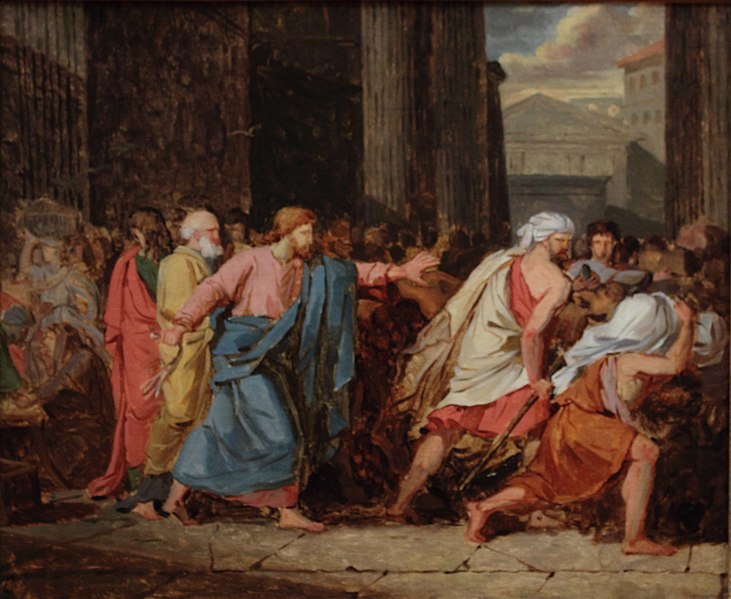 Lent is a time of spring cleaning.  We are called to prayer, fasting, and almsgiving.  Prayer and almsgiving fill us up (in relation to God and neighbor)—but there is something central about fasting, emptying ourselves out.

Thus it is appropriate that the revised Lectionary, after the traditional first two Sundays going into the desert to be tempted and going up to the mountaintop to see Christ, now (unless your parish, like mine, chooses to use the Year A readings because of catechumens) gives us John’s story of Jesus cleaning out the Temple.  To be filled up, we must also be emptied out.

The first reading is the Ten Commandments.  To keep things simple, the Lectionary gives the option of skipping the extra stuff (verses 4-6 and 9-11) and just getting the main points about the commandments.  But the rhetoric of Exodus is wonderful.  All the “Second Tablet” stuff, the stuff we think most about, honoring our parents, murder, adultery, theft, and coveting, gets said very quickly.  But Scripture takes its time with the First Tablet, idolatry, the name of the Lord, and the Sabbath.  The purpose of the commandments is to empty ourselves out—so that we can put our focus on God.  The First Commandment is the longest because it’s the main point.

Our Epistle, from First Corinthians, gives a Christ-centered spin on this emptying out.  “Jews demand signs and Greeks look for wisdom, but we proclaim Christ crucified.”  We have to be emptied out not only of mortal sin, but of all our distractions, all our earthly fascinations, and look to Christ alone.

And so we come to the cleansing of the Temple.  Jesus drives out the sellers of sheep and oxen and doves, and the money changers. 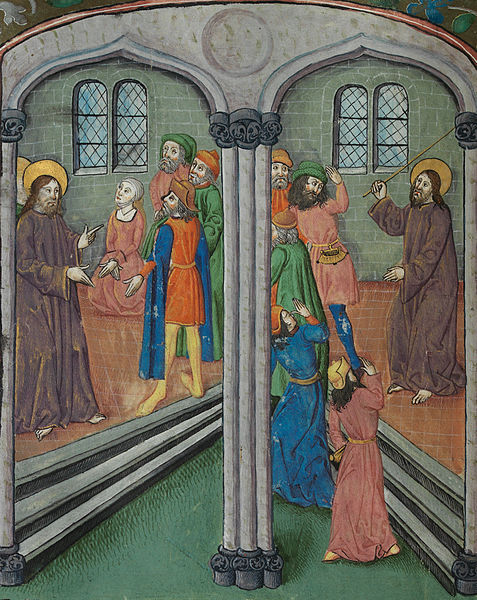 A little background is helpful.  In the last verses of Deuteronomy 14, for example, Scripture specifically says it is okay to buy your sacrifices when you get to Jerusalem.  The language there is nice: in your hometown, you “change” your sheep into money, which is easier to carry, and then change it back into the proper symbols of Old Testament worship when you get to Jerusalem.  As for money changing, I presume the point is that you get your local currency, whatever it is, turned into what can be used in Jerusalem, and pay your tithes.

All of this God has commanded.  And Jesus here calls the Temple his “Father’s house,” and John uses Old Testament Scripture—Psalm 69, “Zeal for your house will consume me”—to confirm him.  Jesus is in favor of the Temple worship.  It finds its perfection in his sacrifice, but here—in John 2, the very beginning of his ministry, first thing after the wedding feast of Cana—he defends the Temple.  The sheep and the money aren’t the problem, and the Temple isn’t the problem.

But Scripture also says, for example in those same verses of Deuteronomy 14, that the priests are supposed to live on the sacrifices and tithes.  Not all of the sheep and oxen get burned up, some of them are food for the priests.  And the people bring other things to the priests, including wheat and money.  So the question is: why are they selling things inside the temple area?  (In fact, the Greek calls it not “the temple area” but “the sacred place.”)  The whole city of Jerusalem is there to be the “marketplace” near the Temple.

The answer, I think, is that the priests are greedy.  They want not only their portion of the sacrifices, but also some profit off of selling the sacrifices (or rent from those who sell).  We are never satisfied with enough, and never satisfied with righteousness (for which we are supposed to hunger and thirst).  Always greedy.  That’s why we fast—to learn about enough, instead of greed. 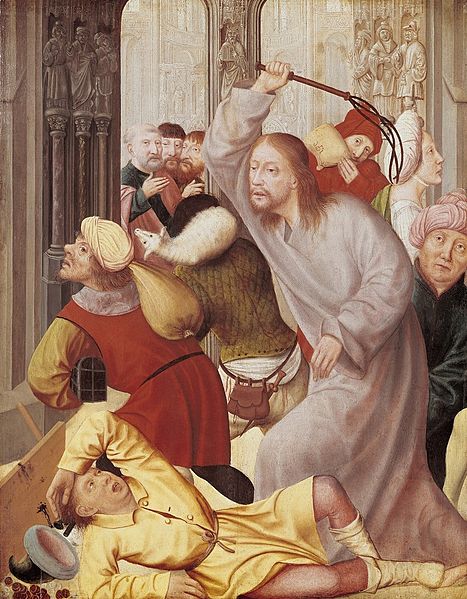 Jesus “made a whip out of cords.”  People often remember the whip and cite this as an example of righteous anger.  But it doesn’t say he was angry, only that he was zealous.  The detailed list of how he dealt with each thing, including asking them to carry the pigeon cages, shows deliberation more than rage.

What is more fascinating is making the whip out of cords.  The word for cords, as best I can tell, refers to the kind of ropes that tied up the animals.  (I guess the ropes are cast aside once the animals are sacrificed.)

Far from an image of rage, this is an image of deliberation.  Jesus sat down and carefully wove his tool.  He thought this out.  Lent is a time for us to carefully weave the tools of our own cleansing.

In the next scene, they ask him what right he has to cleanse the temple.  He responds, “Destroy this temple and in three days I will raise it up.”

They respond, “This temple has been under construction for forty-six years.”  No wonder they’re looking for money.

But Jesus is talking about the Resurrection—and the power and wisdom of God.  Our human calculations lead always to compromise, to set aside the primacy of God in the name of human prudence.  Jesus calls us to keep holy what is holy, trusting that he can build what needs to be built.

What human calculations are crowding your Temple?