For three weeks the Sunday Gospel readings walked us through Jesus’s Sermon of Parables, Matthew 13.  My commentary focused on the hidden power of God.  The seed planted in different kinds of soil, and beside the evil one’s tares, the mustard seed, the leaven, the hidden treasure, the pearl of great price,

the net that gathers in: all of these are symbols of the Holy Spirit, or the Divinity hidden in the humanity of Christ, the power of God that can transform us.

But before we move on from Matthew 13, let us pause to note a corollary.  Each of these parables is at the same time a parable of God’s power and of our call to repentance, grace and free will.  It is not one or the other, it is both, and we need to see both, not only to understand these parables but to understand the Gospel itself.

St. Paul has a technique of slipping in something we think is minor beside things we think are major.  For example in, Galatians 5, he says, “Now the works of the flesh are clearly revealed, which are: adultery, fornication, uncleanness, lustfulness, idolatry, sorcery, hatreds, fightings, jealousies, angers, rivalries, divisions, heresies, envyings, murders, drunkennesses, revelings, and things like these; of which I tell you before, as I also said before, that they who do such things shall not inherit the kingdom of God.”

We skim, maybe we don’t even read the whole list.  But watch what he does.  “Adultery, fornication, uncleanness, lustfulness.”  Ah, yes, sexual sin, bad!  Dirty people!

“Idolatry, sorcery.”  Even worse!  Such sinners!

“Hatreds, fightings, jealousies.”  Wait a minute, I can hate, can’t I?  And, I mean, not every fighting is hatred, and not all jealousy is fighting.  How dare he put my jealousy side by side with “really” bad things like adultery and idolatry!  A little divisions and envy aren’t so bad, are they?  Does envy really belong alongside murder, division beside heresy?

The parable of the sower works the same way.  “When anyone hears the Word of the kingdom and does not understand it, then the wicked one comes and catches away that which was sown in his heart. This is the seed sown by the wayside.”  Well, I am not like that.  I embraced the Word of the Gospel!

“But that which was sown on the stony places is this: he who hears the Word and immediately receives it with joy.”  Right, me!  I received it with joy!  “But he has no root in himself, and is temporary. For when 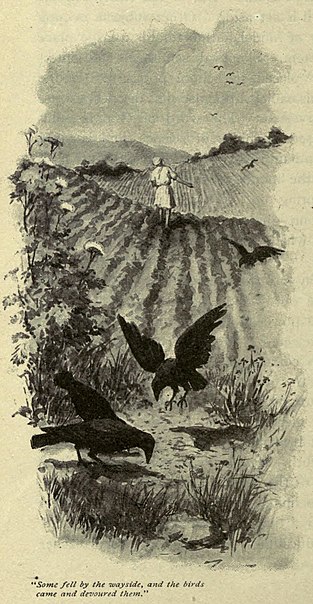 tribulation or persecution arises on account of the Word, he immediately stumbles.”  Oh.

But I’m better than that.  “And that sown into the thorns is this: he who hears the Word; and the anxiety of this world, and the deceit of riches, choke the Word, and he becomes unfruitful.”  This sentence is the climax of the story.  You are someone who has received the Word, who does have roots, who isn’t just temporary.  And Jesus says: that isn’t good enough.  Because even if you have deep roots, you can choke out the life of the Gospel by your worldliness.

The Gospel is tough.

And it concludes, “He who hears the Word and understands; who also bears fruit and produces, one truly a hundredfold; and one sixty; and one thirty.”  He says, even those who are fruitful are not all equally fruitful.  Bear the hundredfold.

We are called to sanctity.  That doesn’t work with taking it easy.

The wheat and the tares spins the same lesson another way.  On the one hand, we are so judgmental, but the Master of the harvest warns us , sometimes the ones you are judging are wheat, not tares.  And on the flipside, are you so sure you are wheat?

This parable ends with the first of several threats in this sermon: “bind them in bundles to burn them.”  There are different ways we can think about the fiery punishment – but Jesus insists that the Gospel is demanding.

Later he explains the same parable with some of the most frightening words of the Bible: “The Son of Man shall send out His angels, and they shall gather out of His kingdom all things that offend, and those who do iniquity, and shall cast them into a furnace of fire. There shall be wailing and gnashing of teeth.”

The mustard seed is positive, more about God’s power than about our obligation.  (Unless we wonder what kind of burden the birds in the branches are.)  But then the leaven turns the same idea into a parable of repentance: “until the whole was leavened.”  Has the leaven of the Gospel permeated my whole lump?

That idea hands off into the treasure and the pearl, which demand that we sell everything.

And the parable of the net repeats the threat: “The angels shall come out and separate the wicked from among the just, and shall cast them into the furnace of fire. There shall be wailing and gnashing of teeth.”

The stories in the parables do not require these harsh conclusions.  But the Gospel does: we are called to be transformed.  The power of that transformation comes from God, the Holy Spirit hidden within us.  It is he who will make us righteous.  But we have to become righteous.  Jesus is not interested in sending his Holy Spirit so that we can ignore it and go about our way.

We need to be the instructed scribes, who dig into our treasure house and pull out old and new, digging deep to live the Gospel.

What obstacle is keeping God’s seed from bearing fruit in you this week?