This Sunday has many names.  St. John Paul II renamed it Divine Mercy Sunday.  It used to be called the Sunday in the Octave of Easter – the last day of the week-long solemnity.  For the same reason it was called “Low Sunday”: part of Easter, though not the “high” part.  The pre-Vatican II Missal calls it “In Albis,” “wearing white garments,” though the older, fuller name was “in albis depositis,” “when they take

off the white garments,” because before the Middle Ages, when there were many people baptized at Easter – as again now – this was the end of their week-long celebration in baptismal garments.

Before Vatican II, the opening prayer said simply, “grant that what we have celebrated we may maintain in our lives.”  The new prayer develops the same theme: “let us remember in what font we have been plunged, by whose Spirit anointed, by whose Blood.” This Sunday is a kind of send-off: the Easter solemnities conclude, but the new life they celebrate has only just begun.

And it was called Quasimodo Sunday, because the opening antiphon (what riches we lose by neglecting those opening antiphons!), quoting First Peter, says, “Quasi modo geniti infantes”: like newborn infants, desire milk, with reason and without guile (or in the new missal, “you must long for the pure spiritual milk, that you may grow to salvation”).  Receive the new life given you in Christ!

(In Victor Hugo’s novel, Quasimodo, the hunchback of Notre Dame, the humiliated, the miserable, was abandoned by his mother and adopted by the Church on this day.)

The Gospel for this day has always been doubting Thomas.  On Easter day, Jesus visits the apostles in the upper room, bringing peace and the power to forgive sins – the power of mercy.  But Thomas is not

there.  The next Sunday after Easter, Jesus submits himself to Thomas’s doubting and probing.  He stoops down to Thomas, unafraid to be humiliated and lifting Thomas from his fears.  Mercy.

An interesting detail: on both Sundays, St. John tells us, the doors were locked, “for fear of the Jews.”  We’ve just been through the season where our modern Missals are full of assurances that John isn’t talking about today’s Jews and we shouldn’t be anti-Semites.

Those notes are right, but they don’t go far enough.  For us, “Jews” means another religion, outsiders.  But that’s exactly the opposite of what it meant for John.  John’s point is not that outsiders crucified Jesus, but that his own people did it: “he came to his own, and his own people received him not” (John 1:11).  It’s not only that we shouldn’t hate the Jews.  In fact, when John says “Jews,” we could translate it as “Christians,” us.  We, his people, crucified him.  The constant warning of the Gospel is not against outsiders, but against insiders.  The ones who most persecute Christ are us, the Christians. 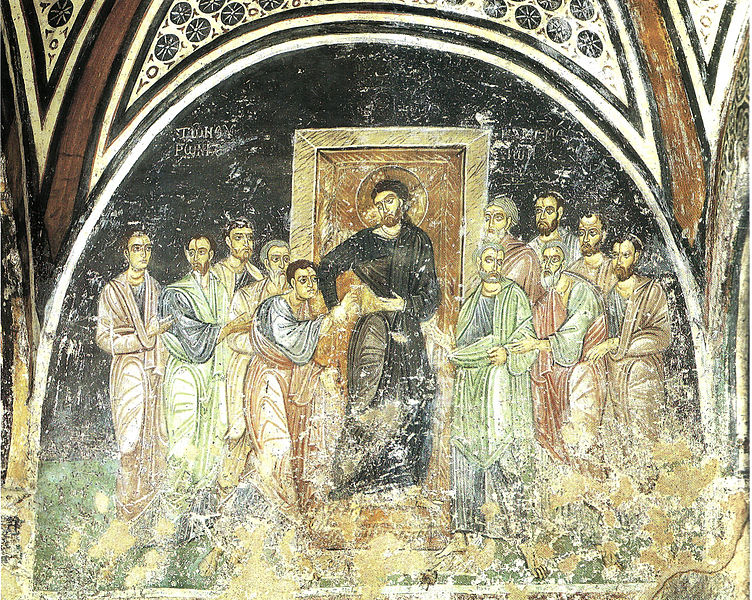 vulnerability, his own hands and heart like an open door.

Our first reading, from the beginning of the Acts of the Apostles – the verses immediately following Pentecost – tell us how the early Church carried on the mystery of Jesus that was given to them.  They lived in the teaching and the common life and the Eucharist and prayer.  And from that rooting in Jesus, came openness to one another: sharing all things in common, meeting in common, making their homes domestic churches.  Their meals were filled with the joy of the Gospel, and what our translation calls “sincerity of heart” has a root meaning of something like, “no stoning of hearts.”  When Jesus came through their locked doors, they opened their own hearts and hands to one another.

As always, the epistle, this time First Peter, gives the theology of grace.  From the resurrection of Christ we have received a new birth and a living hope.  We look forward to the inheritance in the final time.

This reading has one of the best ironic lines in the Bible: “though now for a little while you may have to suffer through various trials.”  No kidding!  Peter knows, in fact, that we will be “tested by fire,” smelted like gold, crucified with Christ.  But the life and love of Jesus poured into our hearts lets us love, and believe, and rejoice, even though we do not see.

Rooted in the mystery of Easter, we have nothing to fear.

Where is the mercy of Jesus calling you to open doors that you have shut?