Since my first John Denver Christmas post was popular – and, more important, since I encouraged us to think about Christmas in relation to the kerygma – here’s another piece.

His theme, I guess, is patience.  Some of the lines are just corny: “Like a baby when it is sleeping / In its loving mother’s arms / What a newborn baby dreams is a mystery”

I’m not sure a baby’s dreams are any more mysterious than anyone else’s, except that they appear to dream a lot about nursing.  So hey, let’s not press too hard on John Denver’s philosophy.  He’s just writing sentimental lyrics about the beautiful things he cares about: mostly mountains (the first line is “When the mountain touches the valley / All the clouds are taught to fly”), other things Colorado (the next verse begins “Like a flower that has blossomed / In the dry & barren sand”), and at this point in his life, I guess, babies (the chorus of another song says, “Merry Christmas, little Zachary” – it appears that he adopted a Zachary and an Anna, which might explain why he loves babies but doesn’t know that newborns appear to dream about nursing).

Well, here’s my point: as Christians, we don’t believe that our lives end the way the river ends when it meets the Almighty sea.  John Denver’s idea is a perfectly reasonable one, held by most world religions: somehow our lives are momentary outgrowths from God (the “Almighty”), like spots on the sun, into which we then disappear again.  That makes sense.

One of the greatest theological words for this is communion (from the Latin translation of the Greek word koinonia, a central word in the New Testament).  Com- means with, and communion means that in our union with God there is not just union, not just one being swallowed up by the other, as the river meets the almighty sea, but still two who are “with” one another. 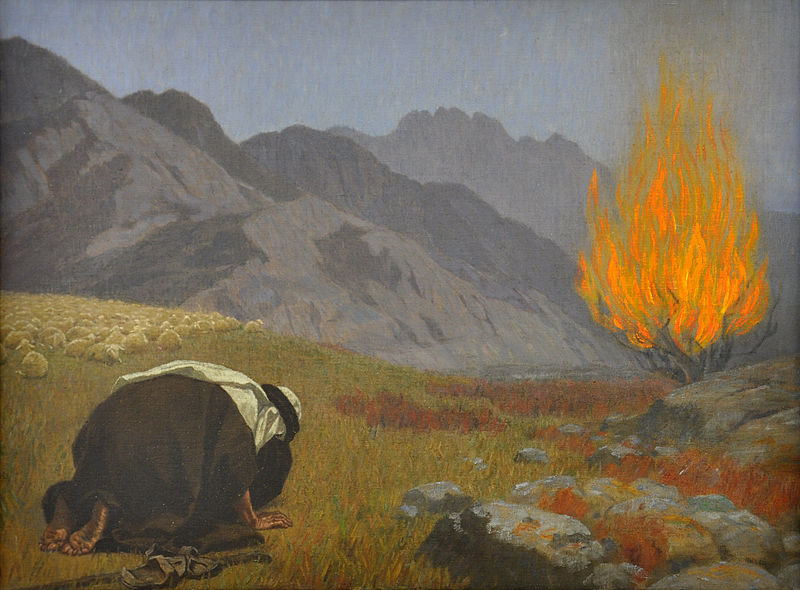 Traditional piety connects Mary with the burning bush – but the original burning bush is the one lying in the manger.  The mystery of Christmas is that human weakness is not destroyed by contact with God.  Were Jesus only to be a superman, we might think that somehow God and man had been blended, a halfway-between – but the weakness of Jesus, in the manger and on the cross, shows us that the fragile human person remains in all its singularity, even in the closest contact with divinity.

Mary is the burning bush because she too remains in her integrity, she is not swallowed up, either by the God in her womb or by being full of grace.  Jesus in the manger is the first full proclamation of the Gospel, and Mary is the second: she shows that the mystery of the burning bush doesn’t end with Jesus, but is our destiny too.

We don’t end like when the river meets the sea, swallowed up and disappearing.  We survive, like the burning bush, and live eternally, full of the light and life of God himself.  Communion.  That is the kerygma, and that is the mystery of Christmas.  John Denver has it exactly wrong.

Now, I’m not trying to make you a John Denver fan here – I just like the album because I think the Muppets are funny.  (And humor, like family, is not destroyed but embraced by the presence of God.)  But we can come back and see that John Denver does get some things right.

The mountains bumping the clouds is not yet communion – the mountain pushes the clouds out of the way.  But the clouds do survive.  Even silly sentimentality knows it can’t be right that our destiny is just to disappear into the ocean.

The flower that is born in the dry and barren sand hints at a deeper union.  Jesus himself uses the seed as an image of how we flourish in union, and somehow the tender image of the flower does say something about life – though Jesus’s metaphor points to communion by insisting that the soil not be dry and barren.  It is worthwhile to ponder whether God or man is soil or seed.

We needn’t completely beat up on our silly sentimental secular songwriters.  Grace does not destroy nature, and the truest flowering of our nature survives contact with God.  But let the weakness of John Denver’s visions remind us how desperately we need the Gospel of that baby in the manger, and the grace he pours first into his mother’s heart and then into ours, to purify our hope.