Our reading from Acts this Sunday begins, “Peter, filled with the Spirit.”  Acts is like the Gospel of the Holy Spirit.  By my count, the Spirit is named about 60 times in these 28 chapters—compared to 67 times in the 89 chapters of the four Gospels.  Acts shows us the power of the Spirit.

Then he cites Scripture—another manifestation of the power of the Spirit: “He is the stone rejected by you, the builders, which has become the cornerstone.”  Peter knows what they don’t know.  The Spirit has revealed to him the power of Jesus Christ.

Every Easter season we read Acts.  This year of Mark, we read 1 John as our Epistle.  And this week John speaks of knowledge and love.  “See what love the Fathers has bestowed on us,” he says, and twice calls us, “beloved” agapatoi.

Our identity is itself tied to knowledge: what we, God’s children, “shall be has not yet been revealed”—we don’t know yet—but “we do know that when it is revealed we shall be like him, for we shall see him as he is.”  We know that we will know.  The power of the Spirit is in all this knowing.

Every year, this fourth Sunday is Good Shepherd Sunday; we read different selections from John 10.

Now, I don’t want to stretch things too far, but—when he says, “A good shepherd lays down his life for the sheep,” it sounds like he is talking about what is common to all shepherds.  But first of all, the Greek says, “The good shepherd.”  One way to read that is just as a general statement about shepherds, just as the next sentence says what “The hired man” does.  But another way to read it is to say, he’s not saying all good shepherds lay down their life, he is describing what The Good Shepherd does (and “the hired man” might be a more significant figure than he at first appears).

And the way he says, “lays down his life for the sheep” is literally, “puts his soul onto the sheep.”  Yes, it is saying that he is willing to die for them (how many shepherds die for their sheep?).  But later, John will say that when this Good Shepherd is pierced on the Cross, he pours out blood and water for them, and when he dies he “hands over the spirit.”  Both of these statements have to have double meanings: he lays down his life—and he gives his soul, his spirit, to us.

He goes on to talk about knowledge.  “I know mine, and mine know me, just as the Father knows me and I know the Father—and I put my soul upon the sheep.”  Yes, he dies for them.  But they know him because he gives them his Spirit, his soul.  That’s what it means to be his: to know him—whose death and resurrection make him the least knowable of all—because we have received the Spirit from him.

He goes on to say that he has other sheep who are not part of this fold.  “These also I must lead, and they will hear my voice.”  They too know his voice, and follow him—but they hear his voice because he leads them, because he gives them his spirit, speaks into their hearts.

Why does he talk about another fold?  To make clear what defines his flock.  It is only Jesus.  Wherever Jesus goes, whomever Jesus draws, those are his sheep.  It’s not because we were in the right place at the right time, not because we’re part of the right club—but because Jesus has put his Spirit upon us.  Don’t make the church more natural than it is. 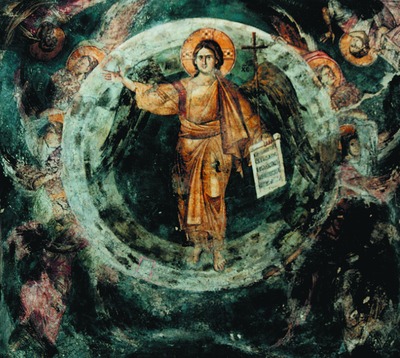 “And there will be one flock, one shepherd”—one flock, because one shepherd.  He’s not saying there are alternate churches—he is saying that what defines the true church is being led by him.

“This is why” (or: it is through this that) “the Father loves me, because (or: that) I lay down my life in order to take it up again.  No one takes it from me, but I lay it down on my own.”  True, this is the power of the Resurrection, that he willingly dies and has power to rise again.

How can you gave more intently on Christ?