St. Jerome and the Bible

I’m sure you know that St. Jerome, whom the Church celebrates today, said, “Ignorance of Scripture is ignorance of Christ.”  It should be underlined that he didn’t say this in passing.  Jerome’s whole life was oriented around his love of Scripture.  He was an irascible monk from Dalmatia (just to the east of northern Italy), who did Biblical work in Rome and then was sent by the Pope to Bethlehem, where he lived in a cave, studied with local experts, including Jews, and translated the Bible into Latin.  He wasn’t the first one to do that, but he did it well.

But though the best name for St. Jerome would be “Doctor of the Bible,” today I would like us to consider him as the “Doctor of Translation.”

Doctor of the Church (ironically, since we’re talking about a Doctor of Translation) is a poorly translated term.  In Latin, doctor doesn’t mean healer, it means teacher.  (We professor-doctors are more properly doctors than those so-called medical doctors!)  The phrase is used by the tradition to talk about that particular group of saints whose writings are especially important: the “doctors” are the great teachers of “doctrine.”  The title seems to have grown up in part as a kind of liturgical category: some saints’ feasts deserve special liturgical emphasis (and later, a special liturgy) because it is so important that we learn from their writings.

In the West (where they spoke Latin, and so used the Latin word “doctor”) the title first went to St. Augustine, arguably the greatest teacher of the Western tradition (at least until St. Thomas, who viewed him as such); also St. Ambrose, his great and spiritual teacher; St. Gregory the Great, one of the most important ones to translate Augustine into spirituality; and St. Jerome.

Later some Eastern, Greek fathers were named: St. John Chrysostom – his second name means “golden mouth,” because he was the greatest preacher of the early Church, bringing his monastic wisdom to the metropolis of Constantinople; the monk-bishop friends St. Basil and St. Gregory Nazianzus, who especially enriched the teaching of the Trinity; and later, to give the East four like the West, St. Athanasius, great defender of the divinity of Christ.

Later on, Thomas Aquinas was added to the list – and after that the title was extended to many great writers.  The point of all this is that the doctors are great writers.  It is a distinction meant to point us toward writings of the saints as an important part of our faith.

Now, the interesting thing for us today is that Jerome is not an especially important writer.  Don’t get me wrong: he was a saint, and like many saints of the early Church, he had interesting things to say about spirituality, and Jesus, and the Bible.  But even his commentaries on Scripture are not that important.

Understand this, and a key element of the Latin tradition suddenly comes into focus.  Jerome is one of the favorite saints of the Middle Ages – and their very most important “writer” (doctor) – purely because he put the Bible into a language people could understand. 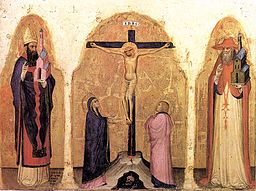 St. Jerome (on the right) and the Cross

Some people know that the Church – in authoritative documents, such as at Trent and Vatican I – said that the Vulgate, Jerome’s Latin translation of the Bible, is authoritative.  But people wrongly interpret that to mean that Latin is a unique Biblical language.  To the contrary, the tradition – and those documents: read them! – understands the Vulgate to be an endorsement not of Latin, but of translation.  What’s amazing about St. Jerome, for the middle ages, is that he took the Bible out of a language that Westerners could not understand and translated it into a language they could understand.  What’s amazing is that we can hear the Bible in a language we understand.

If we want to love the Bible – and to love the Tradition, which loves the Bible – we too need to learn to love translation.  Like Jerome, it’s best if we can learn the original languages.  But for all those people who can’t, thank God for saints like Jerome who make the Bible (and the liturgy) accessible in the language of the people.  Thank God for translators.