And so we begin again, Ordinary Time.  This year we are reading Mark.  As I have often said, I like the theory that Mark was Peter’s disciple, and this is therefore Peter’s Gospel.  Peter is, above all, the one who was commended for knowing who Jesus is – “who do you say that I am? You are Christ!  . . . You are Peter!” – and then immediately put down for denying the cross (“Get behind me Satan”), and who would always know that he abandoned Christ at the Cross.  Therefore Mark’s Gospel is the most Cross-centered, rushing toward the key event.

But because it is short, we also get some supplemental readings from John.  This first Ordinary Sunday (called the Second Sunday in Ordinary Time), in fact, we get the story of the call of Peter.  It is a conversion story.

John is like a theological commentary on the other Gospels.  At the end of our Gospel this Sunday, he inverts Peter’s Confession.  In the other three Gospels, the call of the first disciples begins like this: “And walking along beside the sea of Galilee, He saw Simon and Andrew his brother casting a net into the sea; for they were fishermen.”

But in John, there are three differences.  First, those two disciples are disciples of John the Baptist, not

just fishermen.  The other Gospels tell us that the Baptist has prepared the way – but John the Evangelist dramatizes it.

The second and third differences are here: “One of the two who heard John and followed Him was Andrew, Simon Peter’s brother.  He first found his own brother Simon and said to him, We have found the Messiah (which is, being translated, the Christ).  And he brought him to Jesus.”

Peter is not the first called, he receives his call through his brother.

And Peter is not the first to profess Jesus Messiah – he hears from his brother.  All the way through, they are hearing from another.

John’s version of the story culminates like this: “And when Jesus saw him, He said, You are Simon the son of Jonah; you shall be called Cephas (which translated is, A stone).”  It is an inversion of Peter’s profession.  In the other version, Peter says, “You are Christ, Son of the Living God.”

The standard theory says John is only distantly related to the other three Gospels.  I guess I should submit to those who know better than I.  But look, in the Greek, these are word for word the same.  John isn’t ignorant of Matthew’s story.  He’s quoting it, and turning it inside out.

How powerful the moment earlier in our reading when “Jesus turned and saw them.”  To be seen, to be known, by Christ.

I just got to teach Pope Francis’s Evangelii Gaudium again.  This time, one of the lines that moved me the most quoted this Sunday’s Gospel: “The apostles never forgot the moment when Jesus touched their hearts: ‘It was about four o’clock in the afternoon’ (Jn 1:39).” 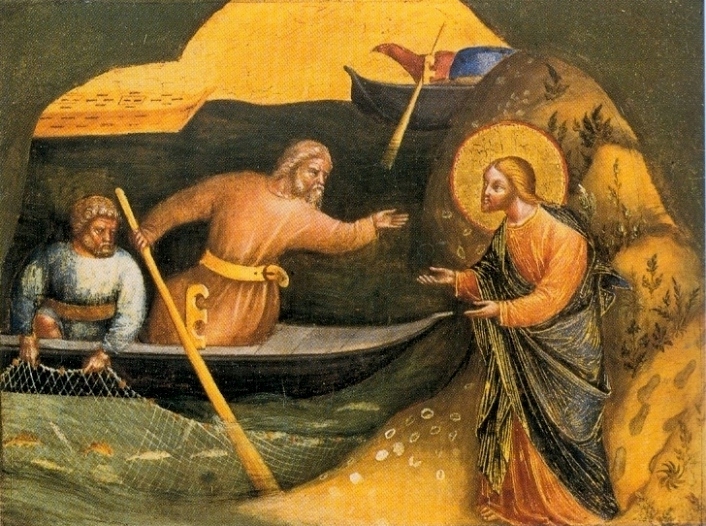 In the introduction, almost the first words, Francis says, “I invite all Christians, everywhere, at this very moment” – not to start with evangelization, but – “to a renewed personal encounter with Jesus Christ, or at least an openness to letting him encounter them; I ask all of you to do this unfailingly each day.”  This is the topic of our Gospel this Sunday.

He continues, “Thanks solely to this encounter – or renewed encounter – with God’s love, which blossoms into an enriching friendship, we are liberated from our narrowness and self-absorption. . . . Here we find the source and inspiration of all our efforts at evangelization. For if we have received the love which restores meaning to our lives, how can we fail to share that love with others?”  Evangelization is a result of the joy of the Gospel.

Our first reading, the call of Samuel, says the same thing.  Samuel leaps when he hears the Lord’s voice, and then says, “Speak for your servant is listening!”  That is why “the Lord was with him, not permitting any word of his to be without effect.”  His words had an effect on his listeners because he was listening to the word of the Lord.

Our second reading is First Corinthians – the first several weeks of each year begins with a different section of First Corinthians – here, talking about sexual morality.  But that’s not how St. Paul approaches the issue.  He talks about being a member of Christ, a temple of the Holy Spirit, glorifying God in our body.  As Pope Benedict said at the beginning of his first encyclical, “Being Christian is not the result of an ethical choice or a lofty idea, but the encounter with an event, a person, which gives life a new horizon and a decisive direction.”

At the beginning of this new year, the Lectionary summons us to encounter Christ, to begin again with that first meeting.  To stumble with the disciples of John the Baptist, as they hear Jesus pointed out, follow him, are discovered by him, go to see where he stays, and thus become apostles even to the other apostles.

When did you first meet Jesus?  Can you remember the hour?