On the first Sunday of Lent, Christ led us into the desert, where we found a rainbow of hope: one image of Lent.  On the second Sunday, Christ leads us to the mountaintop: another image of Lent. 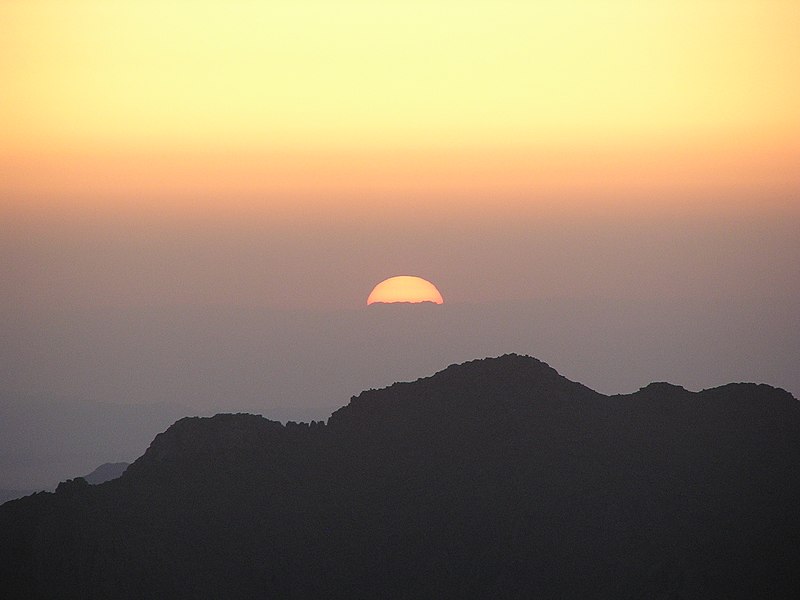 Mountaintops have a romantic reputation, maybe confused with sunsets.  A “mountaintop experience” is supposed to be pure bliss.  But mountaintops are themselves a kind of desert, a hard assent followed by an empty place and rarified air.  And so they too are an image of our Lenten desert.

But the main story is the Transfiguration, where the disciples discover Jesus in a new way on the mountaintop.  This year, of course, we get Mark’s account – the spiritual testament of Peter.

It begins by saying Jesus “led them up a high mountain.”  The Greek is even stronger, more like “carried them up.”  An interesting contrast to the end of the story where “they were coming down” with a verb that emphasizes their own two feet.  We go to the Lenten desert on the wings of an eagle.  The Gospel emphasizes that they were “apart by themselves,” a lonely place, where they will see nothing but Jesus.

Matthew says Jesus’ face and garment are filled with light.  Mark makes it more down to earth: his clothes were like no bleach can make them.  Otherworldly, yet Peter emphasizes that it was incomprehensible to them, a revelation of how little they understood.

Peter says, “It is good that we are here!”  Beautiful, really: Greek’s word for noble and upright is “beautiful.”  But Peter bumbles: “three tents: one for you, one for Moses, and one for Elijah” has something of stuttering stupidity about it.  “He hardly knew what to say, they were so terrified.”  Matthew has the fear in a different place, where they bow down in reverent worship and Jesus touches them.  But for Mark, they’re just blown away, completely confused.

And so too, where Matthew has Peter reverently say, “Lord,” and “if you want,” Mark has Peter call the transfigured God-man “Rabbi,” and there’s no politeness in his offer, just stuttering stupidity.

“A cloud came, casting a shadow.”  It’s a nice translation.  We are too familiar with the religious-sounding word “overshadowing.”  Here it makes a strong contrast: after the bright light of the Transfiguration, there is mystical shadow.  Matthew calls it a “bright cloud.”  Mark just calls it a cloud, leaving them in darkness.  The light of Jesus is more like darkness for the stunned intelligence of St. Peter.

And yet in the end, “they no longer saw anyone but Jesus alone” – and Mark adds to Matthew, “alone with them.”  Here on the desert mountaintop, Jesus astounds and astonishes and baffles – but he is with us.

On their way down the mountain, they talk about what is coming.  He tells them to keep quiet about this vision, “except when the Son of Man had risen from the dead.”  They don’t know what “rising from the dead meant.”  Constantly baffled by Christ – and especially about his call to suffering.

The Lectionary stops there, but the Gospel has one more exchange.  Baffled about rising from the dead, they change the subject: Isn’t Elijah supposed to come?  Can we have more of the exciting part?

And Jesus changes the subject back, “Elijah truly does come first and restores all things. And how has it been written of the Son of Man that He should suffer many things and be despised?”  You want Scriptural prophecies?  I’ll give you prophecy: suffering and persecution.  And he adds, “Elijah has indeed come, and they have done to him whatever they desired, as it is written of him.”  On the mountain, they encounter the cross.

Matthew says that then they understood about John the Baptist.  Mark leaves them baffled.

And so here is another image of Lent.  We go off into the desert, to the mountaintop.  And the more we are alone with Christ, the more we realize how little we understand, how deeply he challenges us.  Lent is a time for that kind of mountaintop experience, slowing down enough to see how challenging Jesus is.  Fasting itself is a new encounter with our frailty and confusion and inability to grasp Jesus.  From the heights, we can see how far we have to go.

This Lent, how is Jesus humbling you?