After a first Sunday that looked forward to the final coming of Christ, our second Sunday of Advent introduces John the Baptist, calling us to “Prepare the way of the Lord, make straight his paths,” and clarifying that the real preparation is “repentance for the forgiveness of sins,” which is the true meaning of baptism.

The reading, from Luke 3, starts, sort of like Luke 1 (“In the days of Herod”) and Luke 2 (“In those days a decree went out from Caesar Augustus”) with a statement that locates the reading historically: “In the fifteenth year of the reign of Tiberius Caesar.”

That statement dates the appearance of John the Baptist in the desert, and the beginning of Jesus’s public ministry: the year 29-30.  Scholars think partly Luke is trying to be fancy.  Certainly he’s trying to state that the events he relates are historical.  When in the Creed we say, “He was crucified under Pontius Pilate,” one thing we mean is, “this is not myth, this is history.”

But Luke goes on, with a lot of details that aren’t necessary for historical dating.  He is telling us more than that this is the year 30.  He is telling us what that year was like—as if, after saying, “in 2018,” we went on to say, “in the age of Hillary and Trump.”

To say “Pontius Pilate was governor of Judea” is to say that Jerusalem is occupied by pagans, by the rulers of this world.

He names only three “tetrarchs” (literally, “the four rulers”); the one he is leaving out he is the tetrarch of Judea, as if to say the so-called Jewish king of Judea (where Jerusalem is) is a non-entity.

“Herod was tetrarch of Galilee” reminds us how far the Herod’s have fallen: this is the son of Herod the Great; now he only gets the backwaters.  It also points forward, as does Pontius Pilate, to the crucifixion: the not-quite-king who will take part in the death of our Lord is introduced as a no one.

“His brother Philip [was] tetrarch of the regions of Ituraea and Trachonitis”: we are introduced to another nobody, for whose wife Herod will call John the Baptist.  Ituraea is “the land of Jetur’s people”: Ishmaelites, whom David battled.  Some kingdom.  Trachonitis means “rugged stony land.”  Some kings, these miserable tetrarchs.

And then “Lysanias was tetrarch of Abilene,” way up to the northeast, as if to underline that the Herodians who claim to be kings of the Jews are puppet of the pagan caesar, ruling over pagan lands.  “Tetrarch” is a lousy claim to authority.

Then comes, “during the high priesthood of Annas and Caiaphas.”  Caiaphas, of course, again points forward to the crucifixion.  Annas was his father-in-law, yet another puppet of the Romans.  By this time Annas was not high priest, Caiaphas was; Luke is mocking the son-in-law, the puppet of a puppet. 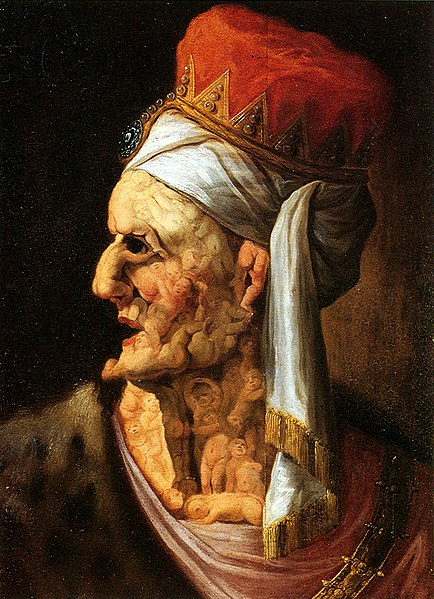 And into this morass comes John: “The word of God came to John the son of Zechariah in the desert.”

Zechariah himself was introduced, in chapter one, in the same kind of juxtaposition: “In the days of Herod [the Great, the father], king of Judea, there was a priest named Zechariah, of the division of Abijah. And he had a wife from the daughters of Aaron, and her name was Elizabeth.  And they were both righteous before God, walking blamelessly in all the commandments and statutes of the Lord.”

Scholars cites this “days of Herod” as if it proves Jesus wasn’t born in the year 0: Herod died in 4 BC.  But whereas Luke 2 (“. . . This was the first registration when Quirinius was governor of Syria”) and Luke 3 (“In the fifteenth year of the reign of Tiberius Caesar”) are both specific, Luke 1 is not.  It doesn’t sound to me like Luke is trying to date the annunciations to Zechariah and then to Mary so much as to situate them.  Herod was king—and Zechariah and Elizabeth were righteous.

So too, in Luke 3, Herod Jr and the rest of them claim power: and John, in the desert, son of the righteous ones, hears the Word of the Lord.  John calls us to repentance—but Luke is calling us to repentance, too, asking us whether we’d rather be in the palaces of kings, or in the desert, or the stable, whether we’d rather sit with these stupid puppets who do what they’re told by filthy pagan Romans, or whether we want to follow the Word of the Lord.

Our Psalm again cites the torrents in the southern desert.  Into the dry land of Roman power comes pouring the power of God’s Word, the power of repentance, and of the Holy Spirit, and of Jesus.  Which do we cling to?

It puts a shattering spin on the mild words of our reading from Philippians: “I pray always with joy in my every prayer for all of you.”  With joy, because the Word has come to us.  But praying, because we have chosen darkness.

“And this is my prayer that your love may increase ever more and more.”  That is the torrent in the desert, the rush of new life: God’s love, poured into our hearts, “with knowledge and every kind of perception,” to see truly, to make crooked ways straight, to prepare the way of the Lord.