Last Sunday’s Gospel ended with a baffling command: “He strictly ordered his disciples to tell no one that he was the Christ.”  Why not?  This week we read the passage that follows, and learn something important about evangelization. 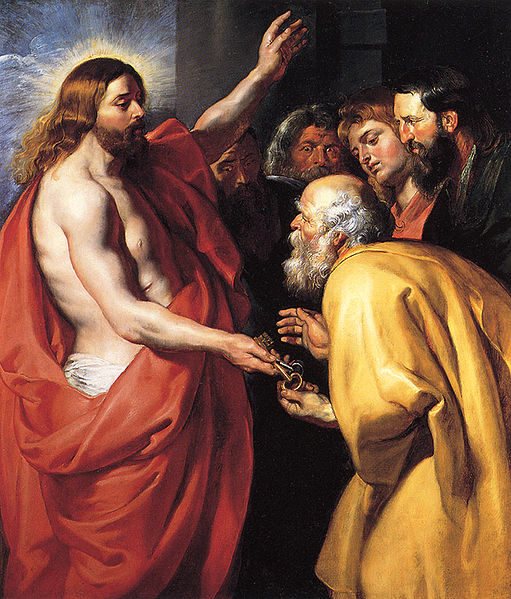 Our reading begins, “Jesus began.”  It leaves out the words before, “From that time”: from the time of Peter’s profession that Jesus is the Son of God, Jesus began to tell them about the Cross.  “Jesus began” suggests that he repeated the teaching, and that it took time.

The next verse of our reading has another “began.”  “Peter took Jesus aside and began to rebuke him.”  From the time Jesus began to teach about the Cross, Peter began to challenge him.

In our translation, Peter says, “God forbid, Lord!”  Those are such strong, specific words – I don’t know why translators choose them.  Paul often uses a phrase translated that way, me geneto, which is strong like God forbid, but doesn’t bring God into it.  It just means, “no way!”  But Peter here uses a different phrase.  It’s something like “gracious me!” except in Greek it’s “gracious you!”  The Greek is even closer to “happy for you.”

It’s a nice choice of words – let’s assume the inspired writers choose their words well – because it is upbeat, positive.  Peter is contradicting, but he’s contradicting with happiness.

For which, of course, Jesus calls him Satan and a scandal.  Jesus’s words are well chosen, too: “get behind me.”  Because Jesus is telling Peter not just to go away, but to follow him.  And where Jesus is leading is not so happy-go-lucky as Peter would prefer.

Matthew the accountant is making a point that Mark makes in a more artful way.  The tradition tells us Mark was a disciple of Peter.  And so in Peter’s version, no one acknowledges Jesus as Son of God until the crucifixion.  You can’t know who he is until the crucifixion.  Oh, I’m sure Peter said, “You are the Son of God.”  But Peter would be the first to tell us, “I had no idea.”

Because as soon as Peter called him Son of God, Jesus began to tell him what that meant, and Peter

began to contradict him.

We have read about Peter discovering Jesus as savior: “Lord, help me!”  Always we are tempted to misinterpret.  Jesus as savior might mean that we will always go happy places.  To the contrary, Jesus leads us through hard places.

There are plenty of consolations along the way.  The next story is the Transfiguration.  But that story too ends, “Tell the vision to no one until the Son of Man has risen from the dead.”  They will not understand until they pass through the Cross.

In the second part of our reading, Jesus gives a series of statements about our crosses.  First he says we must deny ourselves and take up our cross and follow him (get behind me!).  It’s the second time in Matthew’s Gospel he has told us to carry our cross (see Mt 10:38).  As far as I can tell, it was not a normal expression.  Even before he told them about his cross, he was telling them about theirs.

The Greek word for cross is derived from the word for stand.  It means a stake, a post.  Something you are tied to, to be exposed.  You are going to be exposed, hung out to dry.

Jesus explains, “For whoever wishes to save his life shall lose it.”  Literally, whoever protects his soul will destroy it.  And whoever destroys his soul – it’s a strong word – will find it.

Why?  “For what profit would it be” (I translate literally) “to gain the whole world and damage your own soul?”  Peter wants to push Jesus around according to his earthly idea of happiness, but Peter will damage his soul by those standards.  He needs to learn to follow a different standard, and that means following all the way through the cross.  Otherwise we chase after many things that aren’t what we need, and damage our soul.

And Jesus is coming – this reading looks forward – “in his Father’s glory and then he will repay all according to their deeds.”  How will we stand before his glory?  Will we choose him?  Or wish for earthly things?

Our first reading, from Jeremiah, “You duped me, O Lord,” talks about God hooking us and leading us into a way that is mocked by earthly standards.

Our Epistle, now in Romans 12, the start of Paul’s teaching on the Christian life, urges us to offer our bodies as a living sacrifice and not to conform our minds to the world.

Let not your minds be conformed to this age.

How has Jesus shaken your earthly standards?