The fourth Sunday of Lent is Laetare Sunday, rose-vestments, a moment to rejoice in the midst of Lent.  For Year B (unless your parish uses Year A, the readings for catechumens), our Gospel gives a sort of stylized vision of the Cross: Jesus is “lifted up,” the light of the world, so that we are not condemned but saved: “for God so loved the world.”  It is another image of the joy of the Lenten desert.

On our way to that Gospel, the Lectionary gives us an astoundingly rich Old Testament reading, from Second Chronicles, of all places.  (The little tastes we get from the Old Testament should set you on alert: these books are more wonderful than we could ever imagine.)

It is the story, told many places, of how God allowed first the ten tribes of the North, then even Jerusalem and the two tribes of the South, to be conquered by the Assyrians and the Babylonians.  Even here there is Good News—rejoicing, even in the Cross and the Desert of Lent.

The reading is hard because it is full of Hebrew puns.  “The anger of the Lord against his people was so inflamed.”  Now, the Bible uses metaphors—in the very first question of the Summa, Thomas Aquinas talks about how the Bible uses metaphors both to make divine realities accessible in human language and to remind us how far we are from full knowledge of God.  Of course, the Tradition says, God doesn’t literally get angry.

But here it’s not even a metaphor—not that metaphor, anyway.  The Hebrew word for anger really means “heat.”  God is a consuming fire.  He doesn’t have to get worked up, and it’s not about emotion.  It’s about the reality of God, which our sin runs against like a car racing into a brick wall.  God isn’t angry, he is fire.

The result is that “their enemies burnt the house of God”: his flame consumes them.

Then, in that opening statement, his anger isn’t “inflamed,” as in our translation.  In the Hebrew, it “ascends,” goes up.  Then the enemies “ascend” against them.  And at the end, God’s people “ascend” back to Jerusalem.

And in the middle, God says that by letting his people be deported, he will enforce on the land the sabbath rest that they refused to take: “during all the time it lies waste is shall have rest”: sabbath.

The punishments fit the crime.  God isn’t randomly lashing out in anger.  He is—albeit through created causes—bringing his fire and rest and rising up into his people.  At first it hurts—but then it becomes joy, transfiguration.

Our Epistle, from Ephesians, gives a very gentle spin to the Cross.  “We are his handiwork, created in Christ Jesus for good works.”  God is at work in us, he has “raised us up with him.”  Our Epistle says this is about “God, who is rich in mercy,” “great love,” “by grace,” “immeasurable riches,” “kindness,” “the gift of God,” “that we should live.”  Very positive.

But let’s not forget, what he means is that we are being converted, and it is by passing through the Cross of Christ.  On one level, this is very painful.  He is not leaving us as we were, “dead in our transgressions.”  Conversion hurts.  But on the deepest level, our mid-Lenten Epistle reminds us, it is pure joy.

Our Gospel is the second half of the Baptism discourse to Nicodemus, “unless you be born again,” though now Christ talks and Nicodemus disappears from the story.

“Just as Moses lifted up the serpent in the desert, so must the Son of Man be lifted up”—lifted up on the Cross.  The comparison is striking: Moses’ serpent is the one who bit them, killed them, punished them for their sins.  Again, Jesus puts it in a positive way, but we are reminded that the Cross is the sign of our sin. 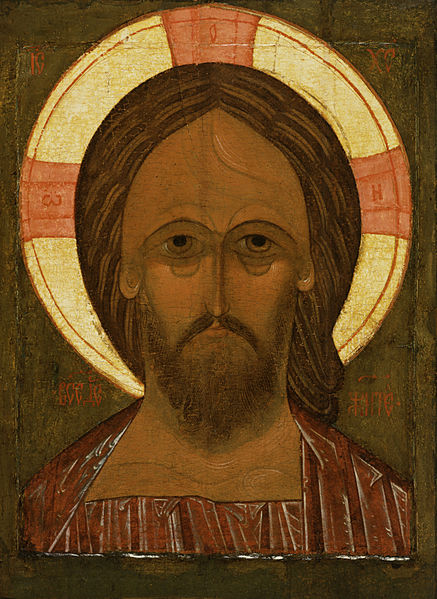 “God so loved the world that he gave his only Son, so that everyone who believes in him might not perish but might have eternal life.”  The word for “perish” is the strongest one possible, with a preposition added to strenghten it.  We are on the road to destruction—and Christ, Christ on the Cross, pulls us out.

“Everyone who does wicked things hates the light and does not come toward the light, so that his works might not be exposed.  But whoever lives the truth comes to the light, so that his works may be clearly seen as done in God.”  The Cross reveals our sin: our violence, our hatred, our sensuality, our negligence, our rebellion.  True life is in acknowledging our need for conversion—and letting God work that conversion in us, even through Lent and the Cross.  Staying in the dark means destruction.

Laetare Sunday is still Lent, still the way of penance on the way to the Cross.  But in that penance is the joy of turning to the Lord.

Where do you need to be reminded of the joy of conversion?