Glory Be and Devotion to the Holy Spirit

As we approach Pentecost, we should think about devotion to the Holy Spirit.  One approach is to pray the Glory Be.

For some reason it’s finally struck me recently, after twenty years of praying the Liturgy of the Hours, how often we say this prayer.  A parallel: the first couple times I went to a Byzantine Mass were in a chapel I stumbled into in Paris.  My French is only okay, and I didn’t understand much.  But I did notice how often they said, “ayez pitié sur nous,” have mercy on us.  Gosh, I thought, the Byzantines love that phrase.  But if you came to a Roman Liturgy of the Hours in the same situation, you might think, “wow, they love to say Glory be to the Father, and to the Son, and to the Holy Spirit.”

One way to make our life more liturgical might be to run with that.  Love to say Glory be.  Say it often.  Say it well.  Say it like you mean it.  Be a Catholic.

It’s such a simple prayer.

“Glory.”  There’s an old Christian pop song that my kids like that says, “there’s such a thing as glory.”  What does glory mean?  Oh, I’ve written about that before: it means majesty, it means light, it means awesomeness.  But there’s something to that old pop song: rather than trying to define it, let’s just glory in the reality of glory.  It’s a word that picks us up beyond the ordinary, that gives us hints of heavenly splendor, that says there are beauties of which this world can only dimly hint.  (A better song on the same old album says, “there’s a loyalty that’s deeper than mere sentiment, a music higher than the songs that I can sing”: there’s such a thing as glory.)

Glory to the Father.  Our tradition knows how to pack a lot into a few words.  Mostly, I’m trying to get to the Holy Spirit.  But how can I keep from singing every word of this prayer?  (That’s all Gregorian chant is, you know: an exaltation in the beautiful, glorious words of the liturgy, an effort to hold on for just a few seconds to each of these life-changing, transfiguring words.)

God is glory.  That’s what glory is, and that’s what God is.  Glory to God in the highest means lingering i

n the sheer gloriousness of God, and recognizing that glory means what God is.

But beyond Glory to God, Glory to the Father.  Glory to a God who is more than Creator.  Creator is pretty awesome – and God is more glorious still.

You can’t have a Father without a Son (or daughter), the two words define one another.  Glory to a God who not only makes a creation, which only dimly hints at his glory, but a Son, who shares in it fully.  Glory to the Son who glories in the glory of his Father, who is nothing else but sharing in that glory.

Glory to the Son has two sides, one in heaven, one on earth.  It revels in the eternal mystery of the Trinity, of God being two, Father and Son, who share in the same glory, of God the Father being one who glories in sharing his glory.

But Glory to the Son also revels in the Incarnation.  Glory to the Son means, as we look at the baby in the manger, at the strange homeless teacher, at the man on the Cross – and at the Transfiguration, and the Resurrected Christ – this man, one of us, shares in the glory of the Father.  He is “consubstantial with the Father.”  He is nothing less than the awesome glory of God, come among us.

How good God is!  Glory to a God who would bring his glory among us, who would be so close to us. Emmanuel! 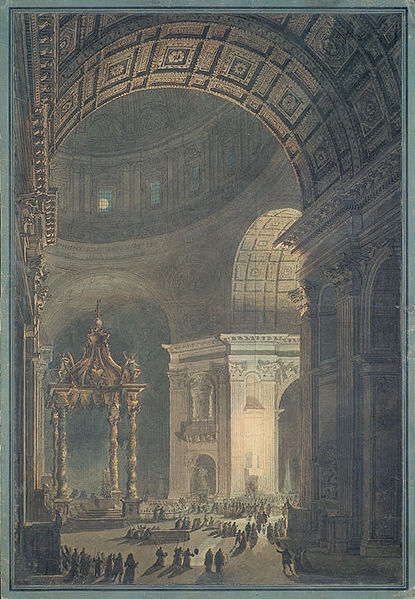 That’s the Gospel: that glory has come among us.  That Jesus who walks among us shares in the glory of the Father and gives that glory to us.

Where does devotion to the Holy Spirit fit in your day?