I’ve been thinking about the Alleluia.  It is is something we say to celebrate, and what we celebrate with it is that, even among the greatness of the other Biblical readings, this one, the Gospel, is good news.  When we say Alleluia, we should pray, “Hurrah!”

But it’s almost funny how that hurrah clashes with what usually follows: because almost always, the Gospel punches us in the nose.  Those who haven’t read the Gospel think it’s full of Jesus telling us how nice he is and how much he likes us just as we are.  But open the Gospel and read it, and you feel yourself almost under seige.

In the last week’s daily Masses, for example, the paralyzed man lowered through the roof got healed, but only after he was reminded that he needs forgiveness, which Jesus alone can give; and the condition of his healing was extraordinarily hard work.  Mary’s life and plans were hijacked to make place for a kind of king none of us is looking for.  We were pointed to the bizarre and frightening John the Baptist, and told that the violent take the kingdom of heaven by force—which could mean a lot of things, but none of them pleasant.  We heard that Elijah—another fearsome prophet—must come, and that we fail to recognize him when he does.  We heard that John calls us to fast, and Jesus calls us, not to feast, but to pursue sinners—and on another day, to seek the lost one instead of just rejoicing over the ninety-nine—and I know I neither fast for seek the lost.  Good news?  Hurrah?

This Sunday’s “Guadete” Gospel, “rejoice,” has three parts.  In the first paragraph, John the Baptist demands conversion.  In the second, he says his call to repentance is only water, but Jesus will bring fire.  And in the third—ah, that Gospel sense of humor—Luke tells us that somehow this is “good news.”

Jesus is fire.  “The chaff he will burn with unquenchable fire.”  “He will baptize you with the Holy Spirit and with fire.”  John the Baptist baptizes with water: for all his terrifying austerity, he can only rinse off the outside.  But fire purifies all the way through.

And the Gospel is fire.  The good news is strange good news: not that we’re fine the way we are, but that Jesus changes everything.  The Beatitudes are the same way: “Blessed,” they begin, “Happy,”—and then they tell us that the path to happiness points what seems to exactly the wrong direction—to the Cross.

I was with a friend recently who was worrying that someone in his life would be a lot happier if she could just focus more on herself.  That makes sense.  The Gospel’s answer makes a lot less sense: but it’s true.

When we sing “Alleluia,” we don’t say, “this will be nice, I’m going to be confirmed in what I already thought,” but “thank God, Jesus comes to shake me out of my complacency, to lead me in new ways—and to purify me with unquenchable fire.”  Thank God I am not left to my own devices.  Hurrah!

(Incidentally, that’s why we should read and preach Scripture, not just our own stupid ideas.)

Thus our reading from Zephaniah promises that the coming King will “renew you in his love” and “turn away your enemies.”  There’s a lot of joy in that—and a lot of purifying fire, since our enemies are within.

And Philippians tells us that a peace that surpasses all understanding—that is, not the peace that makes sense to the world—will guard your hearts and minds, and only “in Christ Jesus.”  “No anxiety,” because “by prayer and petition” we trust God to do what we cannot.

And rejoicing, St. Paul tells us, goes hand in hand with “kindness.”  Sounds kinda hokey.  But John the Baptist says something similar. 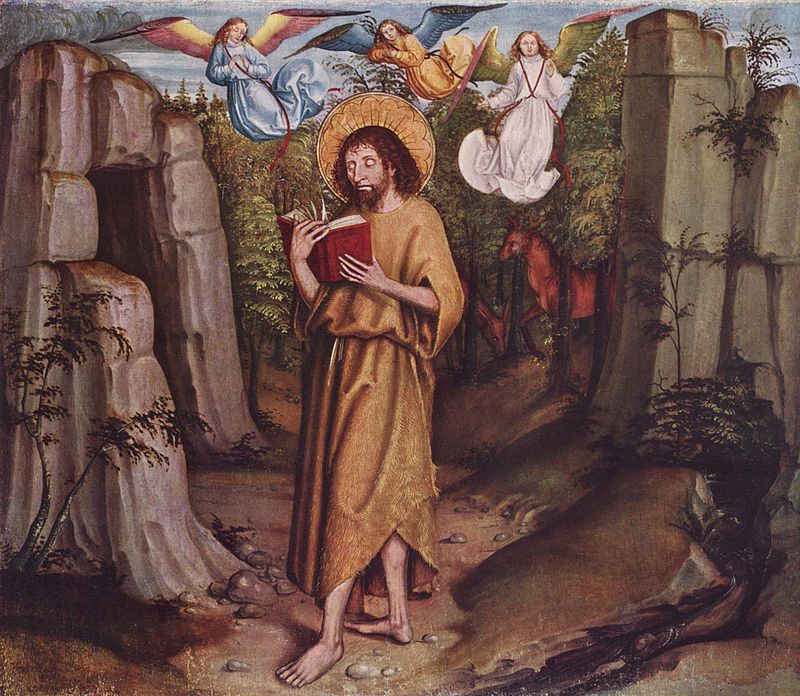 “What should we do?”  “Whoever has two cloaks should share with the person who has none”: pretty reasonable, actually.  Jesus, who is fire, not water, will go much further, and tell us to give our tunic to the one who takes our cloak (Lk 6:29) and, “Sell all you have and give to the poor” (Lk 18:22).

John just tells us not to be jerks: share our excess with those who have none, “Stop collecting more than what is prescribed,” “Do not practice extortion,” “Do not falsely accuse anyone,” “Be satisfied with your wages.”  All of those things, of course, apply far beyond tax collectors and soldiers: plenty of extortion and false accusations in our homes and workplaces.

But though what John says is reasonable, it is also radical.  A strange thing happened in twentieth century Catholicism, where “liberals” told us to be nice to people and “conservatives” said that’s just silly.  In fact, kindness and basic justice are far too demanding for our tastes, which is why we try to explain them away, and they end up demanding the whole moral law, because there’s no justice or kindness in adultery, theft, lying, or skipping Sunday Mass.  (“Conservative” and “liberal” Catholicism both water down the Gospel.)

And that’s just getting started, because where John rinses our outsides, Jesus comes with the Holy Spirit and fire, the winnowing fan to blow away the chaff with which we cover the Eucharistic wheat of the Gospel, and the fire of love to burn it all away.

Good news.  But the good news of the cross, and the poverty of Bethlehem.

How do you encounter the call to repentance?