The theme of our readings this Sunday is “power made perfect in weakness.”  That is the heart of true devotion to Mary.

Now it must be said at the beginning, Scripture is not setting out to lead us to Mary, but to Jesus—and in fact, true Marian devotion leads us always past Mary to Jesus.

Our Gospel has Jesus’s neighbors saying, “Is he not the carpenter, the son of Mary, and the brother of James and Joses and Judas and Simon?  And are not his sisters here with us?”  The Gospel’s aim is not to teach us about the perpetual virginity of Mary—in fact, though her perpetual virginity is important, it is not the central thing we need to know about her.

(That said, we read elsewhere about “Mary the mother of James the younger and Joses” (Mt 15:40): half the women in the Gospel seem to be named Mary, but here it appears that James and Joses, the names of Jesus’ first two “brothers,” are children of a woman not identified as the mother of Jesus.  Paul refers to “James the Lord’s brother”: one of the apostles, the James who is not the brother of John but is called “son of Alphaeus,” and who became head of the Church in Jerusalem, was known by his blood relation to Jesus.  But the author of “Jude” (i.e., Judas, the third of the brothers in Mark’s list) calls himself “a servant of Jesus Christ and brother of James” (Jude 1:1), but John’s Gospel seems to refer to the same one of the Twelve as “Judas (not Iscariot)” (Jn 14:22).  Well, the point is, there are a lot of relationships here, and all we can conclude is that it’s not clear who is literally brother to whom.)

The real point is contained in the first line: “Is he not the carpenter?”  The claim they are making is not that Mary has other children.  The claim is that Jesus is one of them, truly man.  God can’t be man!

Our first reading is the opening of Ezekiel.  In chapter one he sees a vision of God’s glory.  Now he is sent to the Israelites, “rebels who have rebelled against me,” in their exile in Babylon.  We see that God’s people often resist his word.  And that he continues to pursue them.  Man is sinful; God seeks out man.

So too, Paul is given “a thorn in the flesh.”  We don’t know what that thorn was: it could be a temptation, a physical malady, maybe an annoying member of his Church.  It doesn’t matter.  God wants to show him, “My grace is sufficient for you, for power is made perfect in weakness.”  “When I am weak, then I am strong”—because Christ is my strength.

That’s the point of our Gospel.  Jesus is power in weakness, God in man.  We tend to separate them, as if the choice is between Ezekiel’s divine majesty or his fallen Israel.  But Jesus is both.

The Gospel has some nice touches.  They say, “What mighty deeds are wrought by his hands!  Is he not the carpenter?”  A carpenter, of course, works with his hands, to do humble things.  “We know those hands!”  God cannot be in those human hands.

But God is—and the end of the reading says, “He was not able to perform any mighty deed there, apart from curing a few sick people by laying his hands on them.”  A funny line: he couldn’t, except that he did?  Part of the point, at least, is not that he couldn’t do mighty deeds—but that he only did them through those hands.  They reject the humanity of God—and he acts only through it.  Just as Ezekiel’s rebellious house cannot believe that the mighty God comes through such a miserable little prophet. 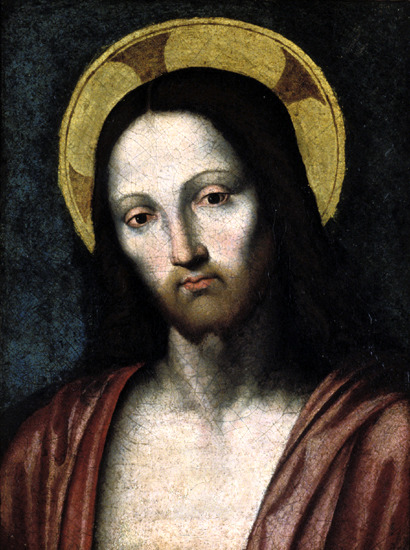 Interesting, though: it also says, “Many who heard him were astonished.”  It isn’t the same word.  That word means something like, “hit with a hammer,” dumbstruck.  The word for Jesus is literally about wonder, about pondering, studying, gazing.  And I don’t want to make too much of a preposition, but Mark doesn’t use the normal preposition for this verb here: Jesus marvels “through” their lack of faith.  He sees right through them, understands them.  He isn’t dumbstruck, he’s wise.

All of this is the true meaning of Mary.  We look to Mary to be dumbstruck that God could become man.  We turn their words inside out, and ourselves marvel: “What kind of wisdom has been given him?  What mighty deeds are wrought by his hands!  Is he not the carpenter, the son of Mary”—and one of us?

The point of Mary is not that she’s so awesome.  The point is that she is so small, so weak, she lets us see in Jesus Christ the strength of God pouring through human weakness.  God became a baby.  And then, by becoming weak, he made us strong: the Mother of God is holy, because she is full of grace: “My grace is sufficient for you, for power is made perfect in weakness.”

Where do you find yourself thinking you need to make up for God’s weakness?