We come to the fifth Sunday of Lent.  In the old calendar this was called “Passion Sunday.”  The Gospel was from John 8, not yet the Passion – as now, they read the Synoptic account of the Passion on Palm

Sunday, and John’s account on Good Friday – but this Sunday began “Passiontide,” when the statues are covered and the prayers increasingly focus on the Cross.  They began to use the Preface of the Cross, there were fewer Glory to the Father’s, the hymns Vexilla Regis and Stabat Mater were sung – we are moving from Lent into Holy Week.

The reformed Lectionary gives us the raising of Lazarus, from John 11.  It is a fitting choice.  John’s Gospel describes just a few events, in the life of Jesus then in 12:1 he begins Holy Week: “Then, six days before the Passover, Jesus came to Bethany.”  Our reading ends with 11:45, “Then many of the Jews who came to Mary, and had seen the things which Jesus did, believed in Him.”  But 11:46 says, “But some of them went to the Pharisees and told them what Jesus had done.”  The rest of chapter 11 centers on the line, “Then from that day they took counsel together that they might kill Him” (11:53).  For John, Lazarus is the final act before the Cross.

The center point of the story is faith in the Resurrection.  When Jesus hears that Lazarus is sick, he says, “This illness is not to end in death, but is for the glory of God.”  The disciples are confused why sickness not unto death is any worry, so Jesus tells them clearly, “Lazarus has died.  And I am glad for that, that I was not there, that you may believe.”  Notice how many times he says, “Believe.”

Most of the story is a dialogue with Martha.  This is where Jesus says, “I am the resurrection and the life; whoever” – here’s that word again – “believes in me, even if he dies, will live, and everyone who lives and believes in me will never die.”  John gets into weird circles like this – but in any case, Jesus is talking about resurrection and believing.

Martha says, “Yes, Lord, I have come to believe that you are the Christ, the Son of God, the one who is coming into the world.”  John is like a commentary on the other Gospels.  For him, the primacy of Peter is clear – and he discusses it in his own way, after the Resurrection: “feed my sheep.”  But John puts Peter’s confession in the mouth of Martha. 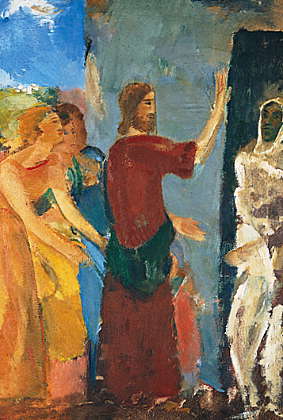 In Matthew, Peter says, “You are the Christ, the Son of the living God.”  It may be the center point of Matthew’s Gospel – and immediately after it comes Jesus’s first proclamation of the Cross.  In Mark, Peter only says, “You are the Christ,” and it is not till Jesus dies that the Centurion completes the profession: “Truly this man was the Son of God.”  But John puts that profession on the lips of Martha, who experiences the resurrection through the death of her own brother, the one for whom “Jesus wept,” entering into the weeping of the sisters.

But she still does not fully believe: when Jesus comes to the tomb, she says, “Lord, by now there will be a stench.”  But when Lazarus rises, “many of the Jews who had come to Mary and seen what he had done began to believe in him.”

“If you had been here,” Martha complains.  In fact, “when he heard that he was ill, Jesus remained for two days.”  “Jesus loved Martha and her sister and Lazarus” – but he did not hurry.

How much of our life is lived in this words?  “If you had been here, Jesus.”  Hurry up!  Why are you leaving me to die on the vine?

But Martha’s profession – like Peter’s and the Centurion’s – must be purified by death.  It is easy to say, “I believe that Jesus is Lord.  I believe in the Resurrection.”  But we must pass through Lent, through fasting, through loss, through the Cross, to find what the Resurrection means.

The other two readings hammer the point.  Ezekiel says that the Lord is a God of resurrection: “I will open your graves and have you rise from them.”

Paul warns us that the deepest resurrection is deeper than we want to go.  The Spirit who raises Jesus’s body from the dead will raise our souls, even though our bodies are dead.  The Resurrection doesn’t mean there is no Lent, no Cross, no death.  It is in the Cross that our souls can be brought to true life, by the purifying of our faith.

Only then, when he has given life to our souls, will he “give life to your mortal bodies also” – only when we have passed through the purification of death and the Cross.

What Cross is Jesus making you pass through?  How is he purifying your faith? 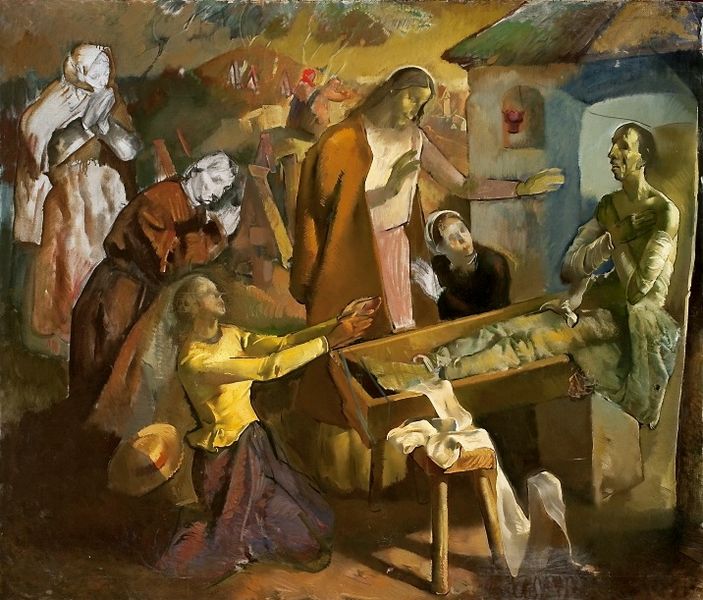