For the last Sunday of our year of Mark, Christ the King, the Lectionary gives us John’s account of the confrontation between Jesus and Pilate about true kingship. 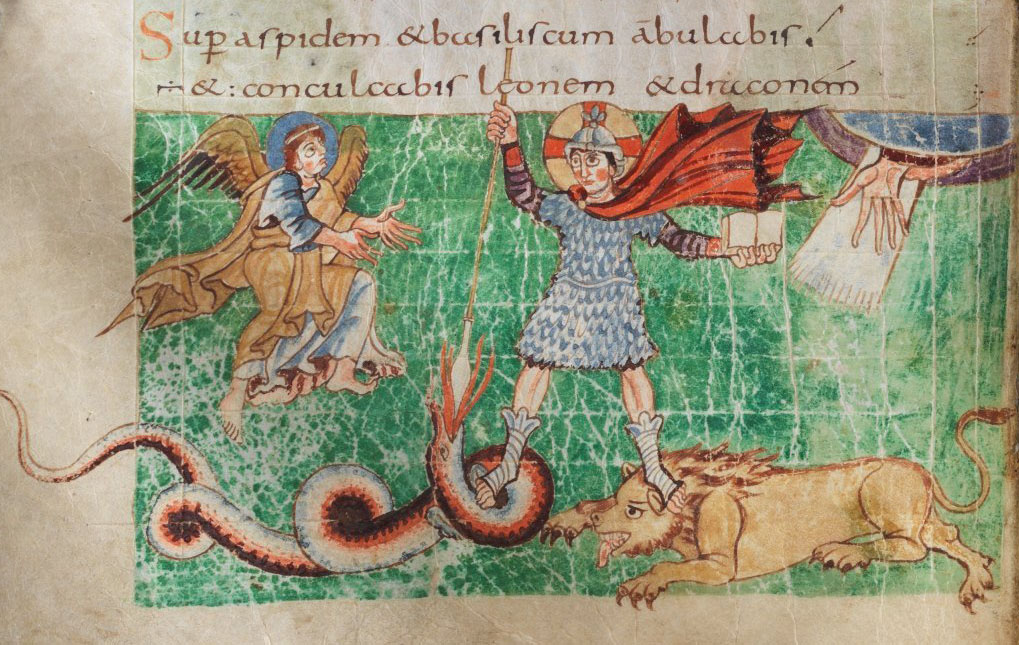 We start with the famous “Son of Man” prophecy, the first vision of Daniel, when the visions begin in Daniel 7.  “I saw one like a Son of man coming, on the clouds of heaven.”  Jesus calls himself “the son of man,” and people make the connection.

Now, I’m not a Bible scholar, so maybe I’m missing something, but it seems to me that “son of man” is used a lot of places in the Old Testament, and it just means, “human,” maybe specifically, “weak human.”  Psalm 8, for example, asks, “what is man that you are mindful of him, and the son of man that you care for him?”

Here in Daniel 7, before our reading, the vision begins with four beasts, the first and fourth of which look like “a man.”  They are big and powerful and bad.  They are defeated not by man, nor by any earthly power, but by “the ancient of days.”  (I can’t find that phrase anywhere else in the Bible.)

The Son of Man “receives” power from the Ancient of Days.  This Son of Man doesn’t conquer, he lets God conquer.

Of course, Jesus is both Son of Man and Son of God—but if he’s referring to Daniel 7, it’s to make this distinction about who is powerful.  We cannot defeat the beasts, or the earthly powers they represent, by earthly power.  Before the power of Pilate, the Son of Man gets crucified.

Before Pilate, Jesus is almost evasive about kingship.  Pilate, the governor, rules on behalf of Caesar, the ultimate earthly king (who is in his own way called son of God and most high, etc.), and somehow cooperates with the local client king Herod.  Pilate knows—or thinks he knows—what kingship means.

So Jesus can’t be direct.  “Are you the King of the Jews?”  As Thomas Aquinas would say, “kingship can be said in many ways.”  Depends what you mean by “king.”

Jesus does claim kingship when he says, “My kingdom does not belong to this world.  If my kingdom did belong to this world, my attendants would be fighting to keep me from being handed over.”  It’s a delightful distinction: yes, I am a king—and no, I am not the kind of king you’re thinking of.

In Pilate’s world—in our world—kings fight.  Kings kill; they are king because they do not get killed.  In that sense, no, Jesus is no king.  But is that true kingship?

Another equivocation is about “the Jews.”  “Are you the King of the Jews?”  Well, yes and no.  Pilate says, “I am not a Jew, am I?  Your own nation [that is, the Jews] and the chief priests handed you over to me.”  Jesus turns that around when he says, “my attendants would be fighting to keep me from being handed over to the Jews.”  Did the Jews hand him over to Pilate, or is Pilate handing him over to the Jews, or what?  Are they “his own nation”?

Yes and no.  It seems to me John’s Gospel uses “the Jews” in a funny way—sort of like how he uses “the world,” which God “so loved” and for the life of which Jesus gives his flesh, but of which Jesus says, about his disciples, “They are not of the world, just as I am not of the world” and even “I am not praying for the world but for those whom you have given me.”  John’s Gospel does something similar with “the flesh”: good and bad, depending what you mean.

Pilate asks, “Are you the King of the Jews?”  And Jesus says . . . depends what you mean by “the Jews.”  “The Jews” can mean those who are handing him over to Pilate, who won’t go into the Praetorium so they won’t be defiled for Passover, but who ask Pilate to help them, because “It is not lawful”—according to Caesar’s law—“for us to put anyone to death”; they later say, “We have no king but Caesar.”  No, he is not their king.  But the Jews are his kingdom.

A lot of these words don’t mean what people think that they mean.

So too, “I came into the world, to testify to the truth.”  But Pilate says, “What is truth?”

These two are not speaking the same language.  Jesus is king, but not by earthly standards.  He is king not because he has the power of Daniel’s beasts, but because he bears witness to the Ancient of Days, the only real power.  “My kingdom is not here.”  Those are words we should say.  Yes, kingdom—but no, not that kind of kingdom.

“Behold he is coming amid the clouds,” says our reading from Revelation.  (I’m not sure why, but these

final appearances always involve “the clouds.”)  “And every eye will see him, even those who pierced him.  All the peoples of the earth will lament him.  Yes.  Amen.”

Somehow, the final judgment will mean seeing the one whom earthly power has pierced, and knowing whose side we have chosen.

Is your kingdom of this world?