This past Sunday—or last Thursday, the fortieth day after Easter, if your diocese can handle mid-week days of obligation—was the Ascension.  “Men of Galilee, why are you standing there looking at the sky?  This Jesus who has been taken up from you into heaven will return in the same way as you have seen him going into heaven.”

This year of Mark, we get one of the weirdest of all New Testament readings.  The end says, “So then the Lord Jesus, after he spoke to them, was taken up into heaven and took his seat at the right hand of God.”  But first comes Mark’s version of the great commission, with some weird promises: “Go into the whole world and proclaim the gospel to every creature.  Whoever believes and is baptized will be saved; whoever does not believe will be condemned.”  So far so good.

But then: “These signs will accompany those who believe: in my name they will drive out demons, they will speak new languages.  They will pick up serpents with their hands, and if they drink any deadly thing, it will not harm them.  They will lay hands on the sick, and they will recover.” 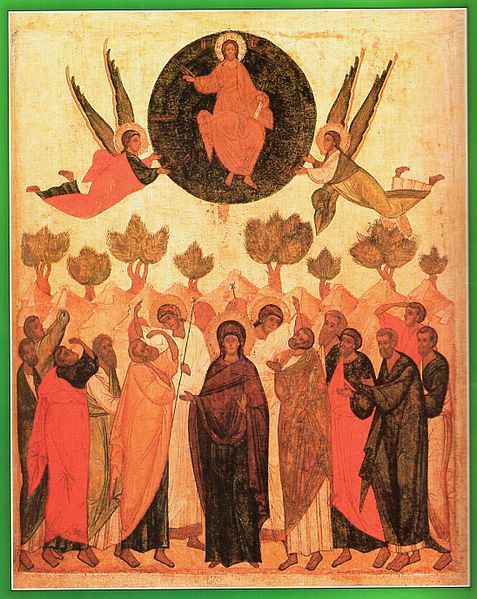 The Ascension completes the Resurrection.  In the Resurrection Christ conquers death—but the deeper point, and the reason for all those appearances where he eats fish and lets people poke his hands—is that he redeems the flesh.  Life in the fallen world is deadly.  But death is not the end, or the goal.

Pagans (and too many Christians) believe that death is a release from the sufferings of this world.  But we look forward to the resurrection of the dead.  We don’t want to be rid of our bodies.  We don’t want to die—though for now, we have to pass through death as part of how Christ conquers our sin.

Mark’s strange lines about picking up serpents and drinking poison point to Christ’s victory over death.  He has taken our flesh into heaven in his body, so that our flesh can ascend to heaven in our bodies, too.  We look forward to the resurrection of the dead.

Mark’s promises are in part missionary.  The Apostles are given miraculous powers as a way to manifest the power of Christ and win believers.  The traditional teaching of the Church is that more such miracles were given in the early Church—because they did not yet have the miracle of the sanctity of the saints, and the conversion of the poor.  We have different, more essential signs now, the miracle of the Church itself.  But in that early age, Christ showed his power through many physical miracles. 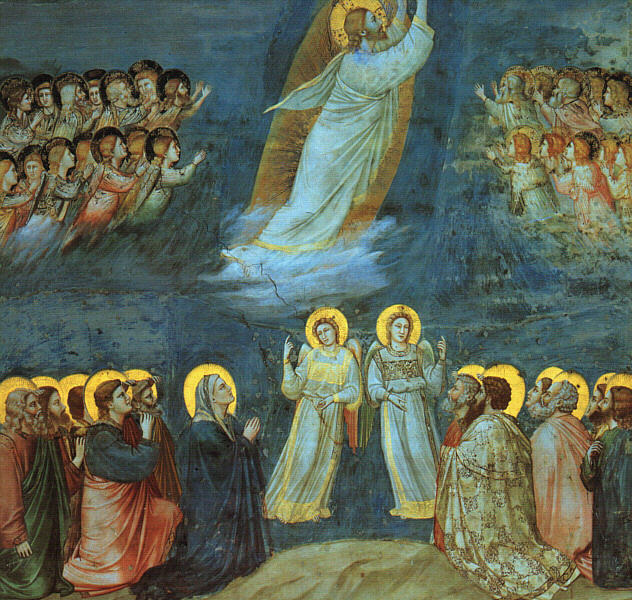 The line from Acts, “Men of Galilee, why are you standing there looking at the sky?” shows us this missionary dynamic.  On one level, it highlights the weakness of the Apostles.  Men from the boondocks, from the backwaters of a backwater country, looking at the sky, is an image of the human weakness of the Church, through which, as through our physical weakness, Christ manifests his strength.

But Galilee is not only a backwater, it is also a crossroads, “Galilee of the Gentiles,” where Jews lived among pagans.  And so those small-town fishermen also point toward Pentecost, which is a miracle not just of general miraculous strength, but of the specific miracle of tongues: the Gospel preached in every language, to every tribe and people and nation.  Only the power of Christ can conquer Babel and forge unity in this divided world.  These Galileans are the first sign that the Gospel will spread from Jerusalem to all nations.

Our Epistle, from Ephesians, makes a parallel point: “to preserve the unity of the spirit through the bond of peace: one body and one Spirit, as you were also called to the one hope of your call; one Lord, one faith, one baptism; one God and Father of all, who is over all and through all and in all.”  And so “he gave some as apostles, others as prophets,” etc.: many tasks at the service of the one mission of the Church. 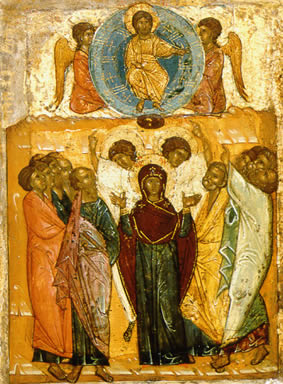 The Ascension is partly about mission.  When Christ goes to heaven, he becomes no longer a member of one nation, in one time and place, but the one Lord of all history.  And so the Ascension brings with it these missionary miracles of snake handling and poison drinking.

But more than that, it is about the victory of Christ, source and goal of that mission.  No more is human flesh a place of distance from God.  Christ takes our flesh to heaven in victory, so that he may triumph in our bodies, too.  Those strange bodily miracles of the early Church serve for mission because, above and beyond mission, they testify to the redemption of the body, Christ’s victory even in our flesh.  We look forward to the resurrection of the dead.

In what ways are you tempted to deny that your own flesh can be transfigured by union with God in Christ?